Game changers: How video games shape relationships in the wake of COVID-19

At a time when people are being asked to physically isolate themselves, video games provide a way for people to connect with others.

While many industries are suffering in the midst of the COVID-19 pandemic, gaming companies are seeing their sales and stocks go up. Nintendo recently reported a 9% year-over-year revenue increase, boosted by massive demand for Switch and the record-smashing game Animal Crossing: New Horizons. PS4 lifetime sales have passed 110 million consoles, as Sony prepares for its next slate of PS5 games. 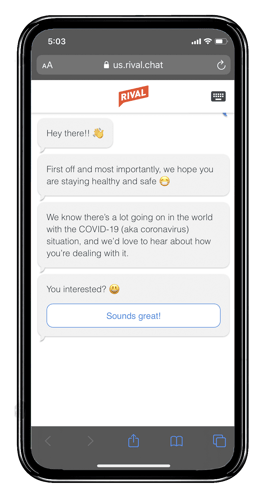 Throughout quarantine, it’s not surprising that gaming is seeing a huge sales boost. With people stuck at home, many are looking for ways to pass the time, stay entertained, and alleviate boredom. We wanted to dig deeper though; what other significant factors are motivating people to turn to gaming during this pandemic?

At Reach3, our clients (both in gaming and other industries such as consumer goods and retail) are very interested in understanding the needs and aspirations of gamers during the COVID-19 crisis. We recently conducted a study to explore how the lockdown is shaping the gaming space.

In early May, using software from our sister company Rival Technologies, we engaged more than 240 gamers who play at least 6 hours of games a week to find the underlying motivations driving the biggest behavioral changes in gaming. Through a messaging-based, conversational exercise, we captured quant and qual feedback that revealed interesting insights that have implications for all industries.

More than a reprieve from boredom

Our research confirms that people are spending a significant amount of time gaming these days. Close to 50% of gamers said they spend 11 hours or more per week playing video games. (As a point of comparison, a separate study of ours found that people spend 15.6 hours per month on streaming services like Netflix, Amazon Prime Video and Disney+.) Three in four gamers reported playing more than usual since the start of the quarantine.

Naturally, people are buying consoles, games and accessories. Nintendo Switch is particularly popular, with 18% of gamers saying they recently purchased one. Switch is big among younger people: more than 25% of gamers under the age of 34 said they recently bought one. These numbers would have been higher if Nintendo did not run of stock.

Beyond the typical reasons people play video games (boredom, relaxation, entertainment), people are using games to cope with pains and social needs that are emerging as consequences of today’s global crisis. 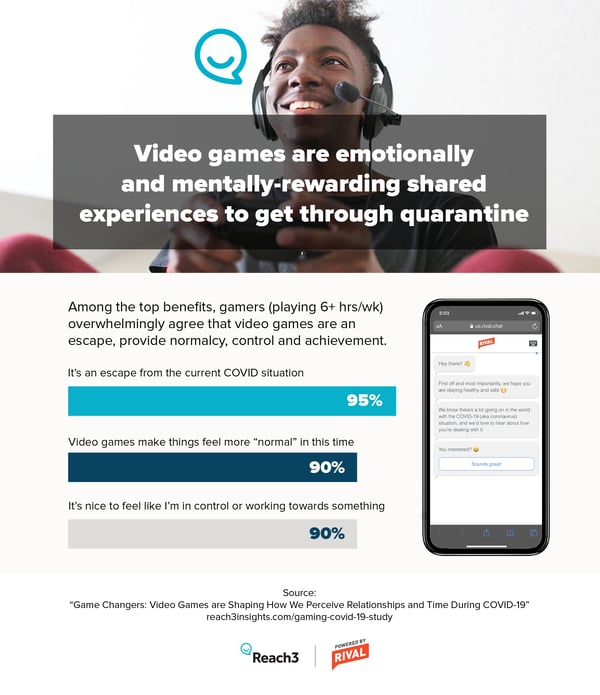 For one, games provide a well-need reprieve from all the depressing coronavirus news coverage. An overwhelming 95% of the gamers we engaged said video games are an escape from the current COVID-19 situation. Ninety percent also agreed that video games help make things feel more normal at this time.

“My online gaming friends have provided a sense of comfort and stability during these uncertain times.”

Interestingly, many players also think that games provide predictability, control, and a sense of accomplishment—intangible things that have become substantially scarcer since the pandemic has started. As one gamer puts it, “My online gaming friends have provided a sense of comfort and stability during these uncertain times.”

Through our previous studies on Fortnite, we know that video games play a bigger role in fostering friendships among Gen Z teens than one might think. Our new research is shedding some light on gaming’s wider impact on relationships.

At a time when people are being asked to physically isolate themselves, video games provide a way for people to connect with others: 82% agreed that gaming is a great way to “hang out” with others, and this number is even higher (90%) among gamers younger than 35.

“Gaming is a good way of connecting with old friends and meeting new ones,” said one gamer in our study. “It is also comforting in many ways to note that people of differing generations can still connect in simple and direct ways.”

73% feel like being part of a larger community when they game.

Video games are also providing a sense of community—something that many people are missing given that they can’t physically get together with their colleagues, friends, and family. We found that 73% feel like being part of a larger community when they game—a number that is again higher (83%) among those between 25 and 34. 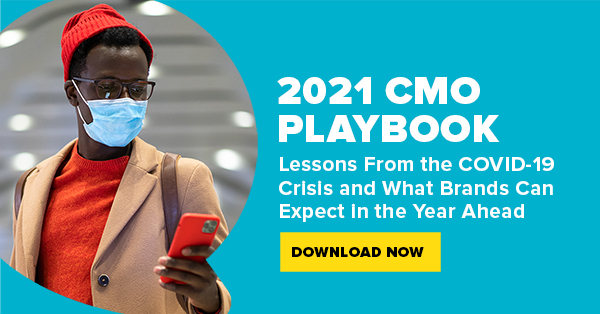 “Other gamers have meant a great deal to me during this time because they act as my community,” one gamer shared, “They are currently the only way I can communicate with others and not feel so alone.”

"Other gamers have meant a great deal to me during this time because they act as my community."

Many gamers (54%) are also moving real life celebrations and get togethers to the virtual space. Whether it’s meeting up with pals to watch and participate in a Travis Scott concert inside of Fortnite, or holding birthday parties in Animal Crossing, gamers are finding clever ways to replace cancelled in-person events.

Gaming’s future in the “New Normal”

While gaming is seeing huge growth now, the industry could potentially face big challenges as people transition to the next phase of the pandemic. In fact, some gamers in our study indicated they may be tiring of video games already. As one person said, “At first it was really nice to be able to play my video games. But after about 3 weeks I started to get bored. There was nothing to do anymore.”

Gaming has clearly been a respite and reprieve for many people, with the World Health Organization even doing an about-face recently on the benefits of video games. That said, there is growing concern that all this additional gaming time may result to addiction. Twenty-three percent of the gamers we engaged said they’re worried that they might get newly addicted to video games after the quarantine—among 25 to 34-year olds, this number is at 34%.

Of course, there are other threats, including potential delays in launching new games and significant supply chain issues, both of which could hamper the planned release of the new Xbox Series X and PlayStation 5 later this year.

For now, gaming companies might benefit from tracking gamer sentiment over time and offering in-game enhancements that speak to people’s ever-changing needs. Borrowing a page from Fortnite’s playbook and organizing virtual concerts and other compelling events could be an innovative way for companies to help provide the social connection people are missing right now.

Brands outside the gaming industry should pay attention, too. As this study suggests, the friendships created in digital spaces (such as video games) are just as important as those formed “in real life.” Companies could benefit from learning more about the social dynamics underlying gaming as these virtual friendships could facilitate positive word of mouth and advocacy for brands from any industry.

Ultimately, we know that stay-at-home orders across the US are attracting new gamers and driving more usage for those who already play. This increased popularity will only make gaming more important in the next few years.

To access our full report on this gaming study, request it through this page.