Change is the only constant in Fortnite—and these tweaks and in-game mysteries drive word of mouth and give players something to talk about.

The conventional thinking on video games is that they are socially isolating. Gamers, as the stereotype goes, play alone, in their sweatpants, locked in their bedroom. They are often portrayed in the media as loners, anti-social and awkward.

But just how accurate is this perception of games and their impact to the people who play them? It’s an important question given how big gaming has become, especially among young people. In 2018 alone, the video game industry is expected to bring in $138 billion in revenue. In the U.S., 90% of teens play video games of some kind, according to the Pew Research Center.

A recent study from Reach3 Insights uncovered interesting findings on the impact of games among Generation Z, the cohort after millennials. Our study explored Gen Z players’ attitudes towards Fortnite, the online multiplayer game that helped Epic Games become a $15 billion business.

As a gamer myself, and as a research professional working with tech and gaming companies, I believe our study provides notable insights for companies that want to better understand Gen Z, which is now the single largest population segment in the U.S.

Creating a sense of belonging and community

One of the biggest takeaways from our study is that Fortnite helps strengthen friendships, not weaken them. Seventy-one percent of the players we engaged with said all or most of their real-life friends also play Fortnite. Sixty-six percent also said that they are better friends in real life because of the game.

In our study, we used software from Rival Technologies to ask players over messaging apps what they like about Fortnite; in the process we also collected hundreds of selfie videos. These videos were useful in providing more context on how Fortnite improves relationships.

We found that Fortnite is something players can excel in and escape to. More importantly, the game provides Gen Zers something to bond over. Change is the only constant in Fortnite—and these tweaks and in-game mysteries drive word of mouth and give players something to talk about. By providing a common ground, Fortnite gives gamers a sense of belonging and a tribe they can call their own, complete with its own lore, rituals and slang.

By providing a common ground, Fortnite gives gamers a sense of belonging and a tribe they can call their own, complete with its own lore, rituals and slang.

Gen Z, as it turns out, is an audience looking for a genuine community. If you want to connect with these young consumers, it’s important to consider how your products, campaigns and user or customer experiences help people bond with each other.

Connecting any time they want

Almost 20% of the players we talked to said they hang out less frequently with their friends as a result of Fortnite. Does this contradict our other finding that Fortnite helps strengthen friendships? Not at all. 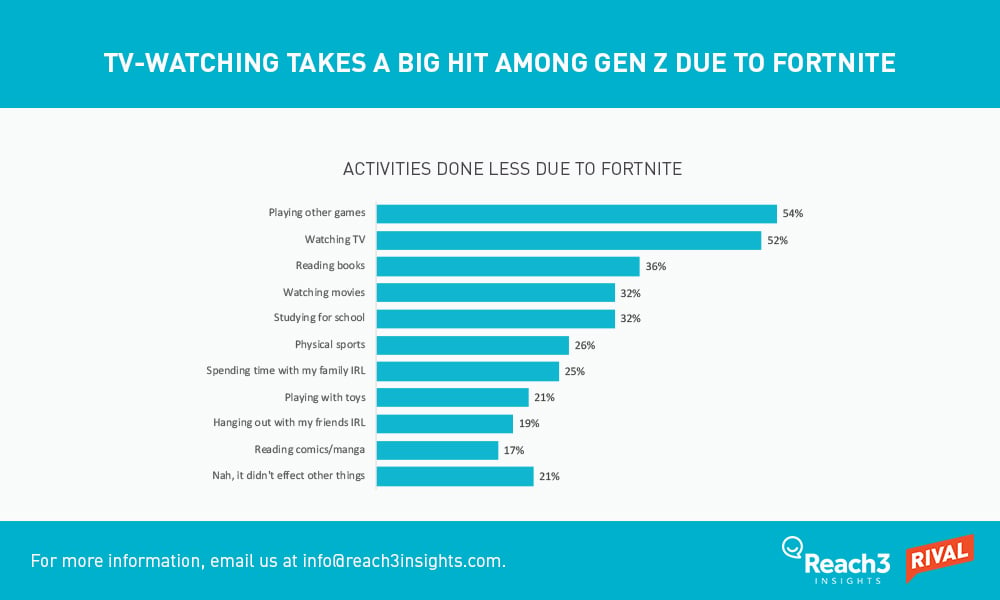 While Fortnite players are less likely to hang out in person, they are still socializing—just not in the same way previous generations have. Since Fortnite is online, gamers can log in any time and play with their friends. Many multiplayer games—Fortnite included—have built-in voice chat features which lets them talk to each other while they play just as if they were hanging out in the same room. In the past, parents might encourage their kids to turn off their games and go outside to play with their friends; today, that advice would be moot since those friends are also online.

This evolution of how young people socialize with each other reiterates the importance of keeping your assumptions in check. On surface, games like Fortnite may not seem like a social event at all, but talking to Gen Z players reveals the exact opposite. Unless you engage Gen Z players directly using the channels they hang out in, you’re at risk of being off the mark.

The rise of streamers was a big theme in our study. For many of the players we engaged with, online streamers like Ninja are just as influential as mainstream celebrities such as Ariana Grande, The Rock and Steph Curry.

Players see their favorite streamers as friendly and someone they would like in real life. Most streamers aren’t all that different from the friends players already hang out with, making those streamers that much more relatable. This is important because these are attributes that players don’t necessarily see in music, movie or sports stars—celebrities who are seen as too big to be approachable.

Is your brand persona seen as friendly and genuine by your target audience? How approachable is your brand? If you want to market to Gen Z, these are questions you need to answer.

Our study shows that stereotypes about gamers are just that: stereotypes. Our findings show that games like Fortnite can have profound impact on how people socialize with each other.

In the end, Fortnite’s astounding rise reiterates the importance of engaging with your audience in a two-way conversation. As the first true digital natives, Gen Zers have lives and expectations that may seem very different from their parents or even from millennials, the generation just before them. It’s important to talk to these young consumers continuously so your efforts don’t come off as fake or trying to hard.

A version of this article first appeared on Marketing Dive.