There are many things that Sony got right and that companies like Microsoft, EA and the E3 organizers should consider.

Gaming is one of the few industries benefiting from the COVID-19 lockdown. As we previously reported, three in four gamers (those who play at least 6 hours a week) are playing more than usual since the start of shelter-in-place orders. Trying to pass time or in some instances manage time, many people are turning to video games for entertainment and socialization during quarantine. 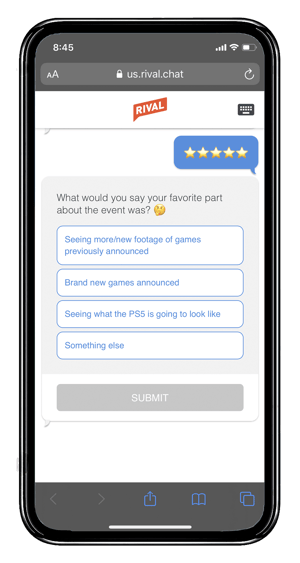 One of the next big milestones in gaming will be the PlayStation 5. Expected sometime this holiday season, this new console was finally revealed by Sony in a special online event called The Future of Gaming on June 11. We took this event as an opportunity to reach out to gamers to get a real-time pulse on their reactions and attitudes towards Sony’s announcements.

Using software from our sister company Rival Technologies, we sent a conversational survey (“chat”) to 342 gamers just two hours after the end of the PS5 event. Findings from this chat provide some clues on what’s ahead for gaming giants like Sony, Nintendo and Microsoft and the rest of the industry.

Gaming is more than just entertainment

Even before COVID-19, gaming was already enjoying a consistent increase in usage. From quick mobile games to the enduring popularity of consoles likes like PlayStation 4, Xbox One and most recently the Nintendo Switch, gaming continues to permeate people’s day-to-day lives.

But it’s a mistake to see gaming as just another form of entertainment. For many people, it’s much bigger than that. This is perfectly captured by this response we received when we asked why people love gaming:

“Stories. Adventures. I love to treat a game as a door leading to another world. On those journeys I learn more about people, myself, and the world. Games have helped me figure out the kind of person I want to be. They’ve taught me to understand the weight of my choices. Games have shown me the value of humanity.

This very articulate response is consistent with some of our findings from previous research, showing that video games are not just something people do to pass time. It’s a way for people to build and create relationships, stretch their imaginations and live a better life.

Historically, reveals like Sony’s event were held at industry conferences by way of a large in-person presentation in a fancy theater. The biggest and most influential had been E3, held in Los Angeles every June, but E3 has seen a continued decline in both attendance and relevancy. Nintendo replaced its traditional E3 spotlight presentations with its own produced Nintendo Direct videos as far back as 2013, and large publishers like EA and Activision have also elected to skip the big E3 presentations. Sony began skipping the pomp and circumstance of a big E3 spectacle in 2019 to replace it with a produced video of their own and continued this approach this year.

Are videos enough or do gamers miss the grandeur of the E3 presentations? According to the gamers we engaged, Sony knocked it out of the park. Ninety one percent said they were either happy or very happy with the event. This overwhelmingly high number is notable because our sample had a good mix of Xbox, Nintendo and PlayStation fans; we weren’t just talking to PlayStation fanboys and fangirls.

That said, the PS5 console reveal stole the show, with over half (55%) saying it was their favorite part of the event. The design of the console also received high marks. 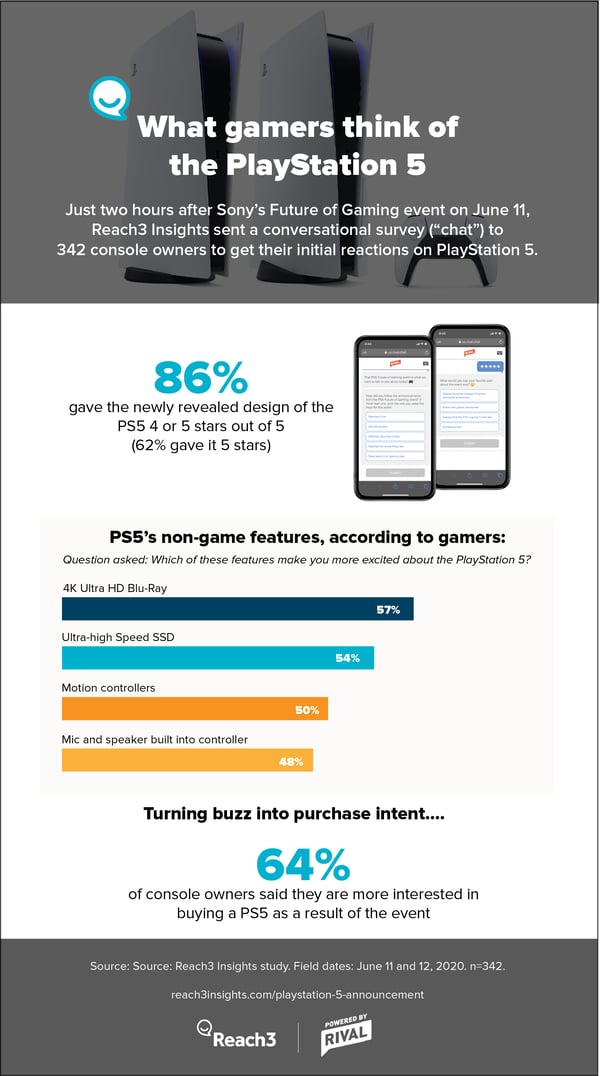 Interestingly, 64% said they are more interested in buying a PS5 now as a direct result of the Future of Gaming event. Of course, an important caveat here is that Sony did not reveal PS5’s price—a big consideration for many whether to buy right away or wait until the console becomes more affordable.

There are many things that Sony got right and that companies like Microsoft, EA and the E3 organizers should consider. First off, when it comes to actual reveals, Sony had them in spades with little to no leaks ahead of time on new games being announced. The event was tight and succinct, focusing a majority of the time on upcoming games.

Also notable is the fact that the event showcased a great deal of actual gameplay footage as opposed to just trailers or presentations from company representatives. As a gamer myself, I can tell you that this makes such a difference. A few minutes of gameplay reveals more about the game than a video teaser or an explanation from a studio head can.

The consistency of existing game franchises

When I watched, I thought choosing a 7-year old title—Grand Theft Auto V—to open an event about the future of gaming was an odd choice, but apparently this was not an opinion held by many gamers.

GTA V was the second most exciting game (48%) as a whole, according to the gamers who took our survey, and the game jumps to #1 when gamers were asked to choose the one single game from the event they’re most excited about (25%). The warm reception for GTA confirms the belief that well-loved franchises are a proven strategy. And while it’s not the right approach for every game or franchise, our finding also suggests that if the underlying game is good enough, treating it as an ever-evolving platform that constantly gets updated is a strong strategy.

The second most popular game from the PlayStation event was an exclusive: the new Spider-Man: Miles Morales. Fifty percent said they are excited about this title, and it ranks only behind GTA when gamers were asked to choose only one favorite.

Gamers still noticed the new titles. While the top games are all from existing and well-known IPs, there is a bright future for new and interesting franchises or one-off games; 57% of gamers said they are excited about at least one game shown that is a new IP.

Our research shows that PS5 is off to a great start, with Sony using the Future of Gaming event to generate significant buzz and interest for the console. That’s not to say that the launch will be a guaranteed success.

The revealed technical specs and Sony still being tight-lipped about pricing suggest that the console will be more expensive than the PlayStation 4.

For one, it’s still yet to be seen whether the console’s price will have a major impact. The revealed technical specs and Sony still being tight-lipped about pricing suggest that the console will be more expensive than the PlayStation 4. If you read between the lines, PlayStation chief executive Jim Ryan’s interview with BBC News suggests that we should expect a higher price point.

“Conventional wisdom and history show that our business is one of the more recession-proof businesses,” Ryan said. “But I think this will sharpen our need to ensure that we focus on getting the value equation right. And I emphasize value as opposed to price.”

The fact that there are two versions of the hardware may give the company more flexibility in targeting both high-end and price-conscious consumers. While some experts believe the digital-only version of the console is a bad idea, its success will likely depend on how much cheaper it is from the full version and its limitations.

And then, of course, there’s the COVID-19 situation. While many states are starting to open up their economy again, the threat of a second big wave of infections looms. If the economy tanks and unemployment climbs, many people will hold off getting their hands on PS5 regardless of the price.

The great news for Sony is that there’s huge interest for PS5 and the new titles the company revealed in its recent event. But the company will need to keep an ongoing pulse on the gaming community. After all, one thing we’re learning with our own COVID-19 market research is that consumer sentiment is changing frequently and quickly. This new era of the gaming wars is far from over.

For a deeper dive into how gaming is shaping up in the midst of the COVID-19 crisis, check out our latest complimentary research.

If 2020 were a TV show, there’d be no shortage of storylines — from the Covid-19 pandemic and the powerful movement for social justice, to sweeping job loss and a...

As this train wreck of a year careens to a close, we at Reach3 and Rival wanted to reflect on some of the biggest things that have changed. It’s been an interesting...

When I decided to join Reach3 Insights earlier this year, the biggest factor in my decision was the company’s core belief in the power of conversation. Together...

Let’s
start
with a
conversation