Gamers may be using games to both fast forward through the COVID-19 crisis and/or turn the clock back to before it happened.

It’s 2020’s biggest question. When can businesses reopen? When will we have a vaccine? When can we see our loved ones again? When (if at all) will we feel truly safe to be outside? When will it all be over?

We are increasingly self-aware that we are living in a historic period, perhaps because we’re tired of seeing companies send us emails and un-unique ads about these uncertain, unprecedented, unparalleled, unequaled, unmatched, unrivaled, unusual, unknown times.

But on an everyday level, quarantine has undoubtedly warped our perception of time as well. With many of us breaking old routines and creating new ones each day, it can feel like time is both dragging slowly yet flying by simultaneously.

Time distortion while playing video games is nothing new—ever notice how a second of lag online feels like forever, but “just one more turn” in a Civ game leads to four hours gone in a flash?—but how is COVID affecting this? 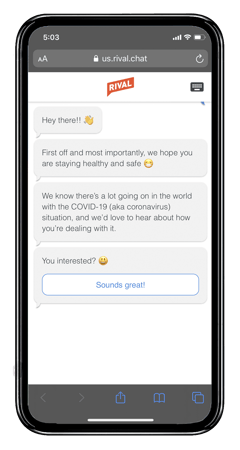 How has the global pandemic affected our already distorted senses of time while we game? Have gamers’ attitudes about time changed?

In early May, we conducted a messaging-based, conversational study to explore how the COVID-19 lockdown is shaping the gaming space. Using software from our sister company Rival Technologies, we engaged more than 240 gamers playing at least 6 hours of video games per week. Our research found that games are shaping the way we evaluate our time across a variety of ways:

For most respondents, passing the time is the biggest motivator for playing video games during COVID. Just having something else to do provides much-needed relief from the real world. No surprise here: time flies when you’re having fun.

Just having something else to do provides much-needed relief from the real world.

“Playing video games really takes your mind off of things,” shared one gamer. “You get so involved with the game, and the time flies by so quickly.”

We know from academic research that negative emotions and rumination cause time to feel slower, while getting in a “flow” causes time to feel quicker. That’s why March seemed to last an entire year and April flew by; we did a lot of ruminating in March as we worried about COVID-19 but got more situated in a new quarantine flow in April and May, which video games may be playing a part in. Understanding how to meet these players in or before their “flow” will be important to companies trying to market to this audience.

From passing time to past times

For gamers especially, digging up old games is nostalgic of life before COVID-19. One gamer mentioned that, “video games help me cope and forget about what is happening in the world. They allow me to go to a time before everything happened and just have fun rather than be worried.”

“It felt comforting to play recent releases as well as revisiting old games I haven't played in a long time,” added another.

“Video games help me cope and forget about what is happening in the world."

Various game developers and publishers have capitalized on this and built up goodwill as well as their own user databases by giving away legacy franchise games for free. Epic Games’ giveaway of GTA V was so huge that it crashed the store (and Epic Games has continued to follow it up with the latest in a nearly 30 year franchise, Civilization VI, and now Borderlands). PlayStation’s Play At Home Initiative gave away their keystone Uncharted franchise (as well as Journey) to fans.

Players’ overwhelmingly positive response and readiness to dive back into nostalgic franchise games may indicate that COVID-19 has positioned 2020 to be a particularly well-suited year for re-releases, remasters, and remakes. Final Fantasy 7’s remake has already rocketed to the top 3 in sales for the year along with unanimously well-received critic reviews. Nintendo may be capitalizing on this nostalgia as well, with rumors swirling about remasters of every 3D Super Mario game coming to the Switch in 2020.

Gamers may be using games to both fast forward through the current crisis and/or turn the clock back to before it happened. Video games are not only offering an escape from reality in place or location, but also an escape in time.

Some games, including the super popular Animal Crossing: New Horizons, even help provide structure around time by setting up routines that people can adhere to. Animal Crossing runs on real-world time, so when the game says tomorrow, it really means tomorrow, meaning gamers interact on realistic timing and pacing. “I like games that involve regular day to day activities, like decorating your home and shopping within the game,” one gamer shared.

And some finding themselves with more time have taken solace in playing games they previously couldn’t. “I was able to finish games that I wasn’t able to finish because I was always working until COVID-19 hit and I was laid off,” mentioned a newly unemployed gamer.

With video games and online multiplayer now accessible 24 hours, there’s no need to schedule anything in advance as there is always someone to play with. “It is also somewhat easy to find those who are willing to play at all hours due to the extended community. It seems that national boundaries are ignored,” remarked one respondent.

Others are finding gaming to be a great way to spend “quality time” with family and friends (both virtual and in real life)—a comment that flies in the face of the loner gamer stereotype.

Providing a shared activity to do collaboratively and/or competitively may be a key reason why 61% of gamers even went as far to agree that they would rather play video games with their friends than chat via call or social media, especially younger gamers (72% for 18-24, 75% for 25-34). Academic research has historically shown that relationships are stronger when couples focus on doing activities and building new memories together, which can feel more actively meaningful than drumming up conversation topics for another Zoom virtual happy hour. Sharing the highs and lows of virtually sky diving out of a school bus may provide something more exciting, novel, and memorable than passively watching TV or staring at yourself in the video chat.

When we choose between entertainment options, is it the time or is it the commitment?

Somehow, I tell myself that I don’t have time to watch a two-hour movie but end up binging eight episodes of Avatar: The Last Airbender on Netflix. It’s not that we don’t have two hours, but we don’t want to commit to a two-hour time block at once. TV episodes provide more frequent break points to pause or stop and less commitment per episode.

Increasingly popular game genres like battle royale have an even lower commitment with more frequent breaks, as rounds may only last a few minutes. Other blockbuster genres don’t even have time limits at all; adventure, simulation, or open world games are easy to stop or pause whenever like GTA, Minecraft, Roblox, or Animal Crossing. You choose to play exactly how long you want, which means you can quit anytime.

23% of the gamers who play 6+ hours per week are worried about new addiction to video games.

Or can you? While the WHO has encouraged video gaming during the pandemic to deter physical interaction, they also classified gaming disorder as an addictive behavior just a year prior in May 2019, and with good reason. In fact, 23% of the gamers (and as many as a third of 25 to 34-year-old gamers) in our sample are worried about new addiction to video games even after COVID.

One factor that might hint at addiction: gaming may even be seeping into bedtime as well. 31% say that video games are cutting into their sleep schedule (especially for younger gamers: 44% of 18-24, 34% of 25-34). And with routines currently in dismay, it’s that much easier to justify those late night game sessions.

Additionally, as we continue to stay at home and cautiously venture back out, gaming attitudes may be beginning to shift yet again.

As we reported previously, some gamers may be tiring of video games already. As one person said, “At first it was really nice to be able to play my video games. But after about 3 weeks I started to get bored. There was nothing to do anymore.”

Even with the sheer variety and volume of video game sales out there, playing games can start to feel similar. Is there a point where video games may be getting repetitive or monotonous?

For a real-time use case, we can return to spring’s hottest game: Animal Crossing. Animal Crossing’s greatest asset is perhaps also its biggest frustration: Real time is real. It’s slow. And when you’re counting down the hours to harvest your fruit and sell your turnips, you might be tempted to adjust the clock. Players can “time travel” by tweaking the clock settings to go back or flash forward to a day when Timmy and Tommy are offering a more favorable price on the stalk market. If my 401k is going to disappear overnight because of COVID, at least I can beat (or beet?) the stock market in fake-animal-fun-time-world.

It may be becoming more important to not only fill time, but to make the most of it in a meaningful way.

49% of gamers say that they feel they could be making better use of their time.

While almost all these heavier gamers (playing at least 6 hours weekly) unanimously agree that games provide an escape, control, achievement, and normalcy, still about half (49%) say that they feel they could be making better use of their time. Non-gamers most frequently say they don’t play because they don’t have enough time or have better things to do with it.

Ultimately, whether games are “worth it” is an individual evaluation. For most, video games are a time-suck during a sucky time, but whether that’s good or bad is up to the gamer. While video games continue to be resilient in the face of the pandemic, it may be too early to predict which games will last or Pokémon Go down as just another fad. Only time will tell.

In the meantime, at least my turnips haven’t rotted.

To access our full report on this gaming study, request it through this page.