53% say colorblind casting adds to a show or movie in general, while 83% of Bridgerton viewers say that it adds to the show

Dearest Readers: Shonda Rhimes’ hit show Bridgerton has already been picked up for a second season, and we want to know what you think.

With a record 82 million households viewing in 28 days, Bridgerton is sexy, scandalous, and “deliciously raunchy.” But beyond the chiseled abs and cheeky romance, we wanted to talk to viewers more directly about something that wasn’t really talked about in the show itself: representation—specifically, the “colorblind” casting. While critics are divided on whether the show addresses race properly, what does the average viewer think? What is the public opinion on how Shonda Rhimes’ first Netflix show treats the subject of race? What implications does it have for the future of Shondaland, Netflix, and entertainment at large (e.g., other diverse royalty like the upcoming The Little Mermaid remake)?

We wanted to dig deeper than just a Rotten Tomatoes percentage to get real opinions on tough topics with our newly launched TrendSpot solution that tap audiences monthly to discuss hot topics in entertainment. Leveraging the Rival Technologies platform and our conversational, mobile messaging-based approach, we reached out to about 500 SVOD subscribers in the US. Our research study was specifically tailored to match the vibe of the show, even featuring some fun ways to probe respondents on the Duke.

How well does Bridgerton address race?

When asked about diverse or colorblind casting, 53% say that it adds to a show or movie in general, while 83% of Bridgerton viewers say that it adds to the show. So, while about half of audiences find colorblind casting is a value-add in general, Bridgerton seems to have hit the mark for most viewers. While not perfect, it is a welcome addition to the show and the period piece genre. 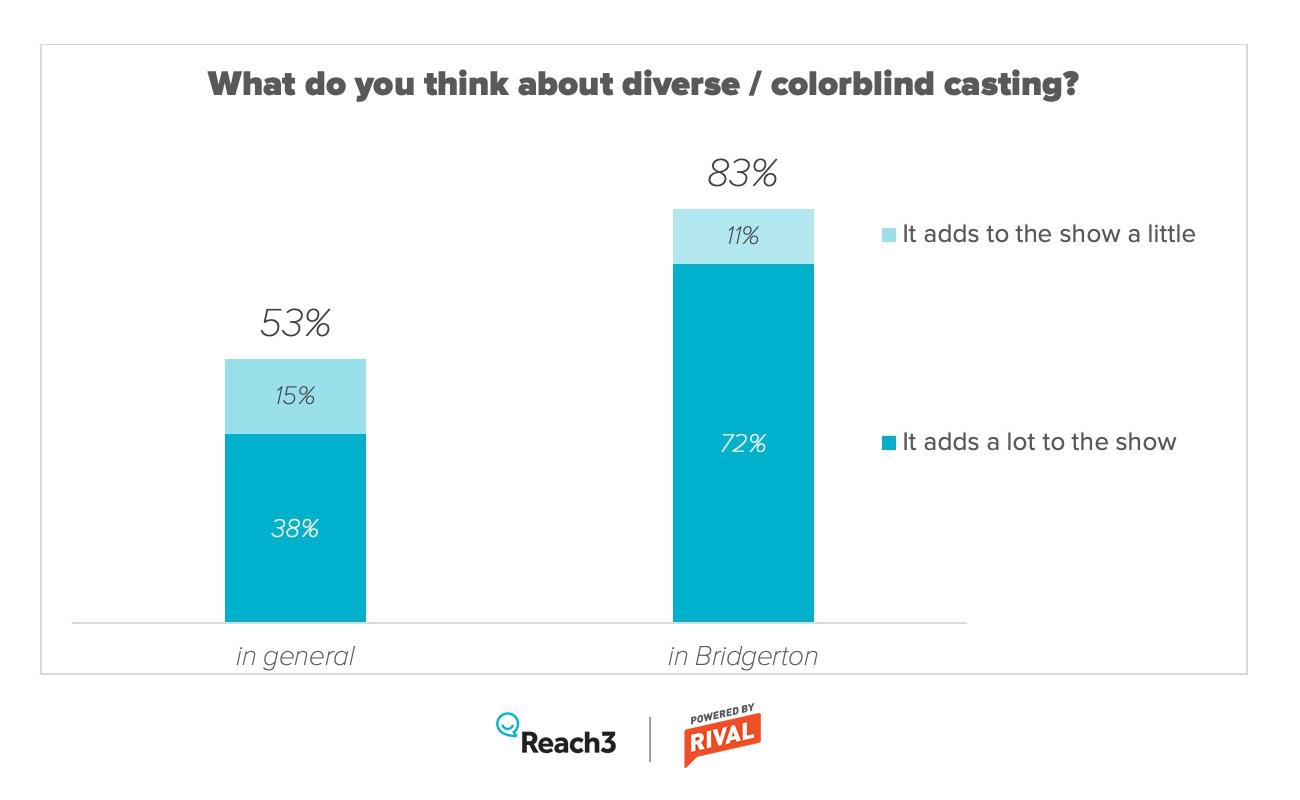 It’s a fine line to balance, as critics have debated whether the show says enough about race. One viewer sums up, “Bridgerton does address [race a little] because the only time it truly was mentioned was when Lady Danbury talked to the Duke about the king falling in love with a Black woman. The entire time the cast acted like it was normal, and you never saw someone say anything racist or said someone didn’t belong there because of their race etc., so it was strange to see it ignored.”

With color-conscious casting, I get to exist as a Black person in the world.

Is Bridgerton even an example of colorblind casting? The lines seem to blur…For the most part, ethnicity holds no bearing on the plot, until the explanation midway through the season of Queen Charlotte’s interracial marriage. However, showrunner Chris Van Dusen points out, “[Colorblind casting] would imply that color and race were never considered, when color and race are part of the show.”

Perhaps the show is better described as being “color-conscious” instead. The Duke of Hastings himself, lead actor Regé-Jean Page, told Entertainment Weekly, “With color-conscious casting, I get to exist as a Black person in the world. It doesn’t mean I’m a slave.”

At the very least, the diverse casting decisions may open the genre to a new type of viewer. One 25-34 year-old white woman states, “I kind of hate the absurdity of the wealthy Victorian era. I think the casting choices made the show more bearable.”

In general, this seems to be the case: 29% of general audiences and 44% of Black audiences say they would definitely watch media if they knew it had a diverse cast. Representation on screen certainly can help drive viewership.

Yet, for a self-described “color-conscious” show, Bridgerton does fairly little to explicitly comment on color. But maybe that’s the point entirely; in essence, one way to normalize something is to not make a big deal about it. Alex Velasquez of Shondaland points out that Schitt’s Creek’s gay couple is successful precisely for the normalness of it all; it’s just a rom-com love story that doesn’t (need to) center around a typical storyline about homophobia or tragedy. The representation itself may be just as (or more?) powerful in making a statement. As Regé-Jean Page continues, “It doesn’t mean we have to focus on trauma. It just means we get to focus on Black joy and humanity.”

29% of general audiences and 44% of Black audiences say they would definitely watch media if they knew it had a diverse cast.

Audiences react positively to the (lack of) over-explicit references to race, with most saying Bridgerton addresses race properly. Many feel that the show doesn’t have to make race a core issue, as simply seeing the representation is powerful in itself. By not bashing viewers over the head with it, the show is able to remain focused on the romantic plot without getting over-preachy.

“It shows Black people in more powerful roles and upstanding character,” explains one viewer. “The show got it just right, and it's not over the top and feels normal. Race brings the characters together in a unique way.”

Another research participant adds, “I think it addresses [race] appropriately - it doesn’t need to be a central theme or commented on. Just the fact that it's there makes its own statement.”

The show got it just right, and it's not over the top and feels normal.

"After the first show, you forget race and just enjoy and wondering what’s next,” says another, “It’s very subtle and not so overbearing."

Does downplaying race do Bridgerton a disservice?

If race is so subtle that viewers “don’t see color” after a few episodes, the show may be missing an opportunity to do more to address race within the context of the show. The George Floyd protests of June 2020 showed us that we can’t simply say “I don’t see color.” Individuals and businesses need to recognize the role that skin color inherently plays, and failing to acknowledge that may undermine experiences of people of color or allow those in positions of privilege to ignore tough conversations about race completely. Salamishah Tillet for the New York Times notes that the only characters who discuss race are Black, which “risks reinforcing the very white privilege it seeks to undercut by enabling its white characters to be free of racial identity.”

Some in our study felt similarly. “It seems to me that the subject was only brought up in relationship to the Queen, and in very brief fashion,” explains one viewer. “What little was said about race was actually interesting, and I wanted more. I was annoyed that it was left unsaid for so long,”

In general, audiences are open and accepting of the idea of recasting traditionally historical or white roles. 74% say that seeing these types of reimagined historical TV shows is “cool” and 71% agree that diverse casting “makes it fresh and interesting.”

However, the decision needs to be done thoughtfully and in the right way. 54% say diverse casting “just doesn't work with some genres or plots/stories,” and 48% agree that it makes historical settings “less believable or accurate.” 43% even say it’s “too much re-writing of history.”

“I understand BLM and LGBTQ issues, but history is history, and fact is fact,” argues one viewer. “We can change the future, but we don't have to change the past—it happened already.”

While the show is set in a historical timeframe, it is also a work of fiction. Perhaps reimagined historical period pieces may win over some more skeptical viewers if they lean more into marketing the show as a reimagining or alternative history, rather than leaving it open to misinterpretation that it’s a realistic or revisionist period piece. In fact, 74% in our study agree that “casting diverse actors in something historical provides another angle or perspective of the truth.”

“It doesn't really matter to me if it is a fictitious show,” says one 55-64 year-old white man. “It is historical fantasy, and it could be whatever it [wants] to be,” agrees a 25-34 year-old Black woman.

However, given parallels between Queen Charlotte’s story and historical evidence that the real Queen Charlotte of England could have been of mixed African descent, critics debate whether the show is truly fictional enough. If the alternate Bridgerton world is so closely resemblant of the real world, it seems at least slightly awkward that race isn’t a bigger topic of conversation. If some eagle-eyed fans even notice that dashed yellow road divider lines didn’t exist until the 1940s, how forgiving of historical accuracy can we (or should we) be?

If Bridgerton were truer to form though, it begs the question and could defeat the purpose: the show is inherently cast to showcase that Black actors can thrive playing complex characters in traditionally white roles of power, and there is space for Black characters in historical pieces besides servants or enslaved people. A truly historically accurate representation of the period could feel like it has been done before, and another slave story could even turn off viewers.

One viewer opines, “I liked the diverse cast, but would like them to maybe be more explanatory about why this isn't historically accurate.” Yet, should Black creators have to lay out everything for the viewer? Does a certain sense artistry get lost if a work must be clearly defined?

“It leaves a lot unsaid which is Shonda’s preference. The fact that there is a mix of unexpected races is her main intention,” argues one viewer.

Like Hamilton before it, Bridgerton walks a delicate balance: at once needing more definition on what it should be, but also not needing to define itself for viewers. Black characters should be able to exist in a show without a close reading of how or why. And viewers for the most part, seem to agree:

“No, [diverse casting] does not distract from the historical accuracy. I think after Hamilton, it's easier to view things this way. It's more about the quality of the writing than the ethnicity of the characters,” affirms a 45-54 year-old Black woman.

At the end of the day, casting decisions need to be done thoughtfully and with purpose. While audiences seem more split on whether diversity in historical films and TV shows can work, 4 in 5 agree that “it needs to add something to the TV show or movie” and that’s even higher (86%) among Black or African American audiences.

Shonda Rhimes’ record-setting start will no doubt catch the attention of other content creators and streaming platforms. With the streaming wars in full swing, it’s a good bet we’ll see more color-conscious or color-blind casting, but companies need to tread carefully. Audiences are particularly discerning about such efforts, and when not done right, it can backfire. Studios and content creators need to go beyond fads and be able to speak quickly, directly, and thoughtfully with audiences on tough subjects to keep a pulse on new ways to capture their attention and imagination.

To learn more about TrendSpot, visit our solution page or reach out to our team directly.