How white privilege is shaping our perception of advertising

Traditionally under-represented groups such as Black (43%), LGBTQ+ (48%), and Women (26%) are more likely to say we need more messaging about diversity.

Last week, we reported that this year’s Super Bowl ads were a little lackluster when it came to diversity, leaving a perception gap between representation in advertising versus how people of color actually felt. We couldn’t just leave it there, so we dug deeper into understanding what’s shaping peoples’ opinions on diversity and inclusion in these spaces.

Using the mobile messaging-based platform of our sister company, Rival Technologies, we talked to almost 600 Americans in early February. Our conversational approach allowed us to dig deep on subjects that are typically tough to tackle in traditional surveys. Here’s what we uncovered about the challenges and opportunities facing advertisers when it comes to diversity and representation. (To view the full, interactive report click here).

So how inclusive are ads these days?

For the most part, people think ads are representative of the overall diversity in America. 54% said that representation in ads is perfect or solid, while 15% were negative about it.

But as soon as you ask people to think twice, the numbers take a nosedive.  When asked how representative ads are of themselves, opinions plummet across the board, particularly among older audiences and Asians.

Older audiences and Asians have every right to be upset about their lack of representation. As advertisers typically focus on younger core demos, there are increasing reports that allege that ads are ageist alongside stereotypes that older audiences are out of touch / not the trendsetters and tastemakers. Our public opinion research here confirms that ads aren’t “just” ads—Asian audiences do in fact notice their historically lacking representation in advertising.

Diversity in advertising is increasingly reaching a saturation point though

We can all agree that diversity and inclusion is important, but is continually talking about it wearing down Americans? Our study found that generally, people are still OK with the way advertisers are addressing diversity, but a large minority is already tired of seeing these messages.

Traditionally under-represented groups such as Black (43%), LGBTQ+ (48%), and Women (26%) are more likely to say advertisers haven’t gotten too preachy and we need even more messaging about diversity. In contrast, White (32%), non-LGBT (32%), Conservative (50%), and Rural (40%) audiences are more likely to say advertisers have gone overboard.  One could argue that this is precisely what white privilege looks like. Black communities do not have the privilege to just skip ads about diversity—they have to live it.

On the flip side, if we want to normalize something, then maybe we don’t need to make a big deal out of it. Our previous research on the hit show Bridgerton demonstrated that was a key reason people liked the show and thought it addressed race well—by not preaching to the choir. Audiences seem to feel similarly about ads.

“Why does diversity have to scream diversity?”, lamented one research participant in our study. “If it’s all about acceptance and being ‘normal’ then why does it have to be the forefront, why can the ad not be a regular ad but just includes people from all walks of life, all races? I just want normal advertising that has people in it promoting the said product, not an ad that ‘teaches’ me how to act or interact. Ads need to be ads for the most part.”

There’s something quintessentially American about only wanting to be sold products and not beliefs, but the point stands: maybe brands need to stay in their lane. We don’t need every advertiser giving us their POV on everything all the time, and if everyone starts saying the same thing, it might feel like just a bandwagon or a trend.  As learned from every corporation's ad about these unprecedented times, messaging (even when important) can start to get real old real quick or even problematic. 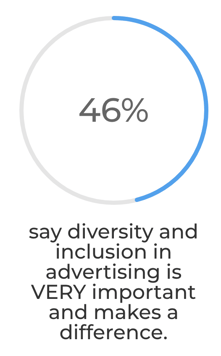 For an issue like diversity, there’s another unique wrinkle for advertisers to consider: technically, good representation implies that things are statistically representative. However, 49% in our study agree that it feels like there are now more minorities in ads than people who make up the majority. It should be noted that Black audiences were much more likely to disagree (68%), but still—are we hitting a point where advertisers’ desire to be inclusive has inadvertently overrepresented some groups?

One of the few Black men to agree that advertisers have gone over-the-top explains, “Right now because of the riots and BLM this past summer, companies seem to be having Blacks in the lead role 50% of the time. It’s overboard. My people make up maybe 15%. I have a feeling if they were filming a caviar commercial, everyone would be a minority, instead of the 99% white customer base of the caviar.”

To be crystal clear, thinking that ads are over-preachy on diversity is a valid sentiment shared across demographics. However, it’s clear that straight, white, conservative, rural, and male respondents are more likely to share this sentiment. For whatever reason that may be, there is no denying that there is something very real and tangible here in recognizing white privilege or white fragility even in the way we watch advertisements, which is explicitly shown by our data. If we’re seeing these kinds of indicators, how do consumers view other media and entertainment?

Seeing is not necessarily believing: how does this impact brand image?

As we hinted last week, consumers are wary of ads that don’t incorporate diversity naturally (like using diverse celebrities as a token minority) and are generally tired of brands that grandstand or directly talk about diversity and politics.  On the other end, people want authentic, real representations of diverse employees and the general tone to be lighter, funnier, and not make a big deal about diversity.

For the most part, diversity and inclusion is not an explicit motivator to buy. 72% agreed that seeing diversity in ads is nice, but it doesn't really affect how they shop.  73% agreed that they’re not really thinking about if a company has diverse ads before purchasing. So brands shouldn’t expect to see a boost in the bottom line just because their advertising is now representative.

However on a more implicit level, diverse advertising may help with brand appeal though. Three-quarters agreed they feel more positively about a brand if their advertising is diverse, and 72% said that it shows the brand cares about being inclusive. And while most might not be thinking about diversity at the time of purchase, 63% agree diverse advertising makes them feel better about buying from those brands, so it is important towards getting a brand to even be in the consideration set.

As you might expect, the benefits of diversity and inclusion in ads extend to social good and are not just limited to advertising and business spaces. 85% agree that seeing ads with different types of people does help normalize diversity, and half have learned more about social causes and diversity from ads.

However, consumers are particularly skeptical of virtue signalling and attuned to identifying if advertisers are genuine. 61% say advertisers only care about diversity because it will make them more money or make themselves look good.  Almost half said that ads about diversity and inclusion mostly feel fake or performative, and 43% don't really trust when a brand makes an ad about how diverse they are.

So how do brands navigate this space?

The bottom line? Keep asking, keep learning. Information that you had last year will already be out of date. Now is not the time to fall behind and end up getting caught short- especially on a topic so much of the population feels strongly about. In 2021, studies are confirming what we already expected: email is outdated (and not just with Millennials and Gen Zs). If you want the most genuine, up-to-date information possible on complex subjects, you have to meet consumers where they’re at. How do you talk about diversity with your own friends? These days, the tough conversations are happening via text, not the email inbox, where people are more likely to engage or react more candidly and in-the-moment. It's becoming increasingly critical when exploring questions about diversity and inclusion to talk to people in a way where the form matches the function.

It’s important to be mindful of the role diversity in advertising will play in the next few years of branding and marketing.  Although a majority (71%) of consumers say that advertisers have not crossed a line (or need to do more in terms of advertising), a measurable number of Americans report already feeling oversaturated. Walking that fine line is increasingly important, and advertisers need to be aware of the inherent ways that white privilege have affected how consumers view their ads.