The Super Bowl 2021 ads were diverse, but did people of color even notice?

There’s a perception gap between actual representation in advertising and how minorities feel about it.

Every Super Bowl has winners and losers, but it’s not just the Kansas City Chiefs that went home empty-handed this year. While some ads stood out, others joined Patrick Mahomes in not being able to find the endzone. Still others like Jeep and Bruce Springsteen faced backlash for the way they handled sensitive subjects (not another celebrity calling for unity 🙄).

As advertisers and audiences get used to more “woke” brands, are we reaching a saturation point in how diversity is included in advertising? Does it even matter? They’re just ads, right?

We wanted to find out what the biggest night in football advertising had to say about diversity, so we reached out to almost 600 Americans on Monday and Tuesday right after the Super Bowl LV to get their thoughts on diversity and inclusion in ads.

Using Rival's market research technology and leveraging our conversational approach, we were able to capture rich insights on the challenges and opportunities facing advertisers when it comes to diversity and representation.

It’s just an ad… who cares?

Does anybody even pay attention to ads anyways? Maybe not normally, but 23% of Americans intentionally looked up Super Bowl ads before the game this year, and 13% say that typically it’s their favorite part. The Super Bowl is routinely the largest and most captive audience towards ads, so it’s critical to nail it in clutch time. In 2021, given the surge in public support for Black Lives Matter last year, there’s heightened awareness among advertisers to be inclusive and diverse.

And audiences agree. 46% say diversity and inclusion in advertising is very important and makes a difference. Among underrepresented groups, that number is actually higher: 69% among Black viewers, and 51% among women. Similarly, 59% say representation in advertising definitely helps make an impact in making people more accepting (74% among Black audiences).

Diversity starts with casting—but it doesn’t stop there

Depending how you slice it… viewers thought that this year’s ads were more average than usual on diversity. A greater proportion agreed the Super Bowl ads were just OK in representation compared with ads in general. Fewer said the ads were perfect, but also fewer said the ads were “meh” and could use work, and it netted out exactly the same (39%). 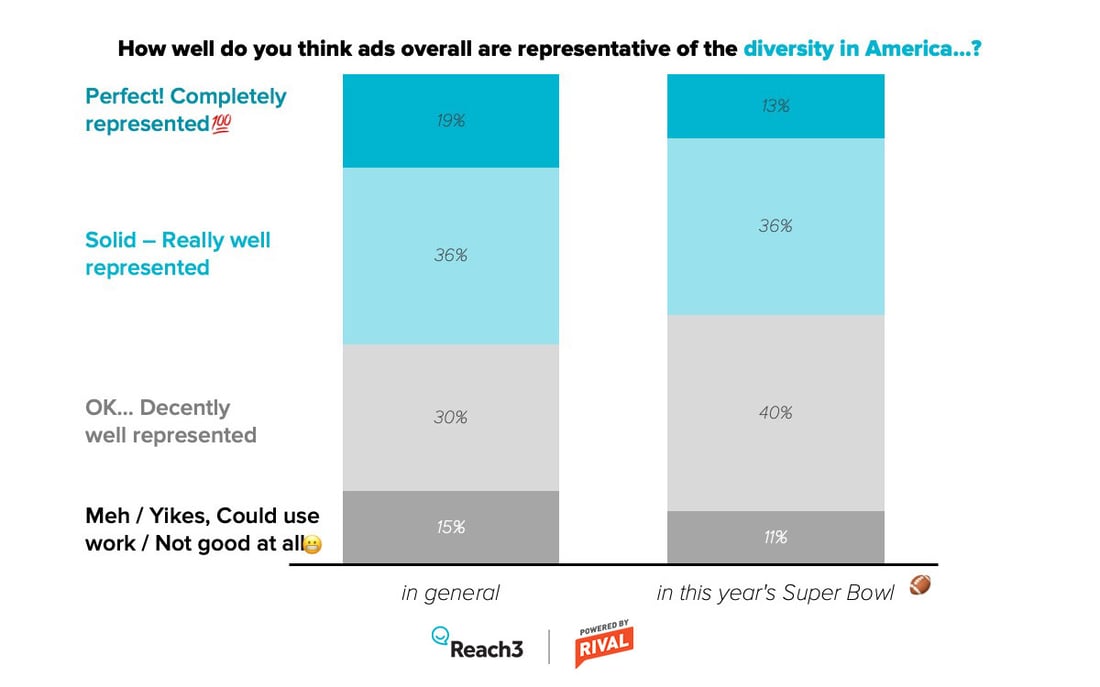 The Association of National Advertisers’ Alliance for Inclusive & Multicultural Marketing (AIMM) tallied the actual numbers on representation in Super Bowl ad casting, and found that compared to the US Census, Black actors were actually overrepresented in the Super Bowl, Hispanics were underrepresented, and Asians were about perfectly represented.

“The ads make America seem like it's just white and Black when there's more ethnic diversity."

Hispanics and Latinos were underrepresented at the Super Bowl this year, and some noticed as well. Hispanics were more likely to say the Super Bowl was a solid representation of diversity, but also could use some work. “The ads make America seem like it's just white and Black when there's more ethnic diversity,” said one Black and Hispanic man. “The M&Ms, and a few others basically had Blacks and whites but completely ignored Latinos,” mentioned a Latino man.

On the other hand, Asian Americans were least likely to feel perfectly or solidly represented and much more likely to feel just OK about it, when in fact the representation was actually almost spot-on. For the most part, Asian respondents mentioned the ads just feeling less funny than last year or nothing standing out. However some noticed that other minorities were getting disproportionately higher screen time and maybe felt left out.

“Amazon—while it’s nice to have an all-Black cast for the commercial, it’s not really inclusive to have a cast of all one ethnicity. Diverse means many different ethnicities,” said one Asian man. “The ads were OK but not all groups of people were represented” said another.

Despite their best efforts, advertisers face a difficult perception to overcome. The way consumers feel about diversity in ads can be polarizing. It seems that the average viewer is not particularly good at estimating representation.

“The diversity is fake—if ads were representative of the real USA then about 80% of all married couples would be mixed race or gay,” said one man. For the record, LGBTQ+ representation made up just 1% of the Super Bowl ads, according to AIMM.

In any case, our research shows that there’s a perception gap between actual representation in advertising and how minorities feel about it. This provides a rich area for advertisers to explore for future research. Perhaps ads still don’t feel representative because of the types of roles given to minorities. Or perhaps the stories themselves fail to showcase a wider range of cultures and perspectives. Ultimately, brands need to figure out what representation really means for people. It starts with casting—but it doesn’t stop there.

Perhaps a more telling approach would be to look at some of Sunday night’s top performers, and I’m not talking about Tampa Bay’s defensive line. Going beyond the typical ad test, we got a quick read on how audiences evaluated diversity on two ads that put inclusive representation front and center in different ways. (Rival's market research platform make it easy to include videos in chats, providing a seamless way for people to review the ads before answering our questions.) Amazon’s ad was lighter and funnier and featured a predominantly Black cast without explicitly mentioning race. The ad did well, leveraging Michael B. Jordan’s star power to garner more than 8 million earned views online.

“The Alexa ad from the Super Bowl was hilarious!” one woman explains. “It was just an ad with a variety of people in it; that is what an ad should be. Why have companies forgot that they are selling products, not values? A commercial is not going to change my mindset; it mainly sells a product.” 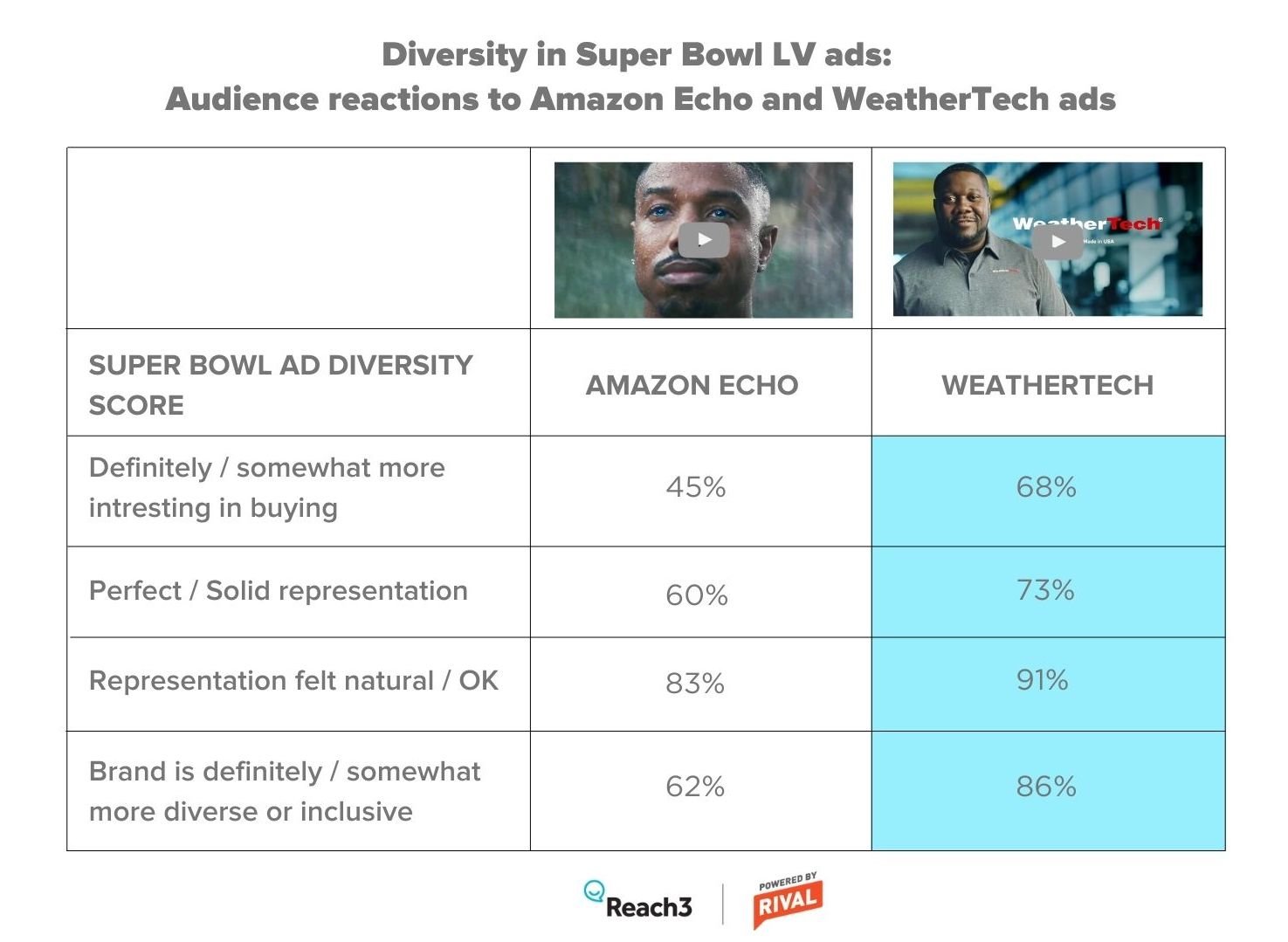 So, why did WeatherTech’s ad fare better on diversity with audiences? A few factors may be at play.

We also asked people to tell us what they want to see in ads with diversity and inclusion. Participation by celebrities is fine but doesn’t reflect on the company’s diversity. Including diverse celebrities scored the lowest among a list of tactics that we tested. On the other hand, showing real and diverse employees scored near the top—a tactic that WeatherTech employed successfully in its ad.

Again, this is an area that advertisers should continuously track, since consumer preferences could change as conversations around racial relations evolve in the US. Consumers are not as receptive to using celebrities to highlight diversity in advertising, as it may be casting token minorities. Perhaps as more ads feature diverse employees, we may reach a point where audiences start to see companies as cherry picking or exploiting minority workers to appear in ads as well.

There’s no point in casting a dashing BIPOC actor like Michael B. Jordan if your workforce is not truly diverse.

But one thing our data suggests is that consumers are more likely to be receptive to campaigns that are backed by real action from brands. There’s no point in casting a dashing BIPOC actor like Michael B. Jordan if your workforce is not truly diverse. As we’ve seen with the Black Lives Matter movement last year, action speaks louder than words when it comes to brand activism.

Like everything about race, diversity, and inclusion, there’s a lot to unpack from this study. In fact, as you’ll see in the report, our study also covered people’s perceptions about diversity in advertising in general. Sign up for our blog as we continue to explore more from this study on the future of how diversity looks in advertising.

COVID-19 has caused 2021 to be the year of change. Changes to work, home life, and (although we try not to think about it) our waistlines. Depending on who you ask,...

In response to mounting pressures to stretch out the new release hype window, many developers now run early access periods prior to officially releasing a new game....