A big, untapped opportunity: New Reach3 study shows why now is the time for CPG brands to go all in on esports sponsorships

Esports sponsorships are driving positive sentiment—both for the advertiser and the company or person hosting the event.

According to a recent WARC report, global ad spending in esports will hit $844 million this year—a 10% increase from 2019. The same study is predicting that the esports market will finally reach $1 billion US by 2022.

While those numbers seem impressive, consider the fact that upfront TV ad spending in 2019 in the US alone was estimated at $21.25 billion, while digital ad spending in the US was $132.46 billion. While growing at a decent pace, spend on esports is a small drop in the giant advertising bucket.

The relatively small investment towards esports is interesting given esports’ popularity among younger viewers. You’d think that because brands are eager to connect with Generation Z, many will be making a substantial and aggressive investment in esports. With live sports still in flux, there’s also an opportunity for esports to grow faster. But the relatively moderate spending on esports suggests that most brands are not seeing the full potential yet.

At Reach3 Insights, we work with brands across various industries (including CPG, retail, tech, media, entertainment and apparel) who are looking for innovative and effective ways of reaching their target audiences. To help these clients better understand this increasingly important market, we recently conducted a study exploring the attitudes and expectations of gamers when it comes to sponsorships. Using a conversational, mobile messaging-based approach and leveraging the market research platform from our sister company Rival Technologies, we engaged 311 gamers (specifically those who own a PS4, Xbox One, or Nintendo Switch) just after the XBOX event on July 23, 2020.

Findings from this study reveals interesting insights on immediate opportunities for global brands. Here’s a look at our top takeaways.

Many of the gamers we engaged with said they have taken some action as a result of exposure to esports sponsorships. More than two out of five said they’ve looked up an advertiser, and 41% said they bought something from a company after seeing the brand sponsor a game, streamer or gaming event. These are impressive call-to-action metrics that point to how impactful gaming-related sponsorships can be.

41% had a better impression of the brand or company as a result of an activation.

These stats show that gamers are very open to brands working with studios, events or streamers. One potential reason for this is that esports sponsorships are still very new—we’re not at a point of saturation yet where gamers might get offended by these types of brand activations.

“Anything that brings esport events to TV and provides money to players is good with me.”

But perhaps a more surprising reason is that gamers, being a tech-savvy community, know that sponsorships help keep the games and events free or affordable. “I like all sponsorships because it shows support of activities or products and I think this is a good thing,” one gamer said. Another one adds, “Anything that brings esport events to TV and provides money to players is good with me.”

Certain categories are seen as a better fit

To determine which products will be most welcomed by gamers as sponsors, we asked gamers to select the brands that they feel are a good fit for this type of partnership. Overwhelmingly, energy drink, snack and beverage brands scored the highest.

Overall, 75% of gamers thought an energy drink such as Red Bull and Monster Energy would be a good fit, while 73% picked a beverage brand such as Mountain Dew, Pepsi or Coke. Seventy-one percent picked at least one snack brand like Doritos.

Why did some brands fare better than others? One potential reason is familiarity: many of the brands that topped this list are products that gamers use every day. Gamers might also be more familiar with these brands because these companies are already dabbling in esports sponsorships. Mountain Dew, for example, has committed a significant chunk of its ad dollars for gaming. Red Bull is known as an esports early mover as well, recently announcing that it is sponsoring a new League of Legends show.

Compatibility between an advertiser and a game, event or streamer is very context-specific.

That said, there are some lingering questions that brands need to explore. Compatibility between an advertiser and a game, event or streamer is very context-specific. As brands evaluate potential partners, it will be critical to engage their own Mobile Community of gamers to learn the pros and cons of the partnership and how to maximize ROI.

Gamers are open to all kinds of sponsorships

Not all esports sponsorships look the same. While some brands like Honda have sponsored events, some companies like Postmates are working directly with streamers and gamers. Others, like Doritos, have worked with gaming studios to offer exclusive in-game items—essentially the gaming version of product placements in TV shows.

In our research, we asked gamers to evaluate different ways a brand might get involved in esports. Surprisingly, all tactics were seen as acceptable by gamers—but sponsoring an entire event was seen as the most appropriate. 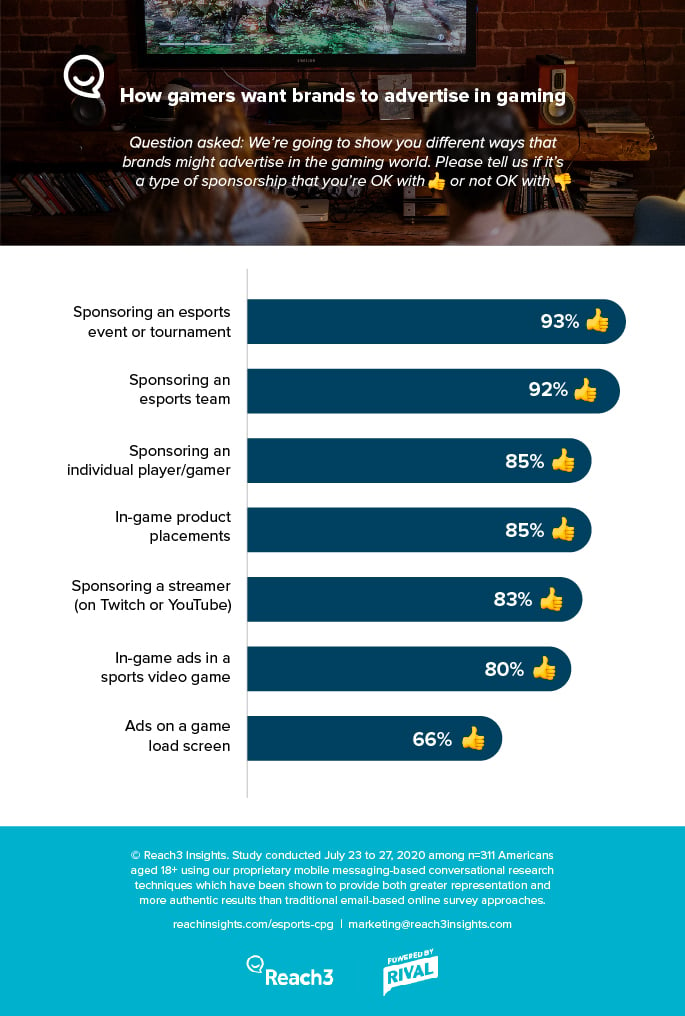 Of these tactics, we were most surprised by the positive sentiment towards in-game product placements. For context, this tactic was framed as in-game objects having real-world brands—so instead of a soda machine with a generic design, it might be Coke- or Pepsi-branded. Sometimes this type of activation gets negative attention online for being too in-your-face (case in point: Monster Energy’s product placement in Death Stranding earlier this year), but our research shows that gamers are not opposed to it.

One potential reason for the positive feedback for product placement is novelty. As one gamer put it, “being able to buy the name brand snacks in game is hilarious and can be so cool when done right.” Similarly, product placements can provide realism in a game and make it more immersive. People are used to seeing brands in real life, so it shouldn’t be a stretch to see real brands in games too. “I always think it’s kind of cool to see daily products shown in the games I’m playing,” said one research participant.

“Being able to buy the name brand snacks in game is hilarious and can be so cool when done right.”

Ads on a game load screen came in the lowest at 66% giving a thumbs up 👍 – unsurprising in that it was lowest among the scenarios asked about, but surprising that it’s as high as it is. Load screens usually show off game artwork and give little tips for playing the game. Turning those moments into ads might get some push back in the real world, especially for non-sports games. We’d recommend that brands looking into this tactic engage their audience and work closely with gamers to make sure that it’s done tastefully and in a way that makes the game more compelling.

For advertisers, there are other rich areas of potential exploration from a market research perspective. For example, while gamers are open to these tactics, which ones would lead to action or purchase? Are certain tactics more applicable to certain categories and brands? Ongoing engagement with a Mobile Community of gamers can help CPG and tech advertisers answer these questions.

Esports sponsorships and the potential for word of mouth

One important insight from our previous research on gaming has to do with word of mouth. In previous Reach3 research, we found that video games help facilitate real friendships. A separate research study from our client Roblox has shown that gaming is helping Gen Z players cope with the COVID-19 pandemic.

Given the increasingly important role gaming plays in people’s lives and in fostering relationships, there’s an opportunity for brands to dig deeper to better understand the dynamics behind these friendships and the word of mouth that they facilitate. Do players talk to other players about cool in-game activations? What kind of esports sponsorships get viewers talking with their real-life and digital friends? Are there ways brands can help to facilitate these digital relationships while also enhancing gamers’ relationships with the brand?

In the end, esports represents an exciting and still largely untapped opportunity for brands to build awareness and drive purchase intent and sales. If you’d like to explore this opportunity further, please don’t hesitate to reach out to the Reach3 team—our conversational, mobile-messaging based approach to doing research lends itself well to engaging gamers in-the-moment and capturing the unfiltered thoughts and feelings of the gaming community.

About the Reach3 methodology

Reach3 Insights conducts scientifically validated consumer research via modern mobile messaging networks instead of email to maximize both the representativeness and richness of insights. This method captures stream-of-consciousness attitudes, opinions and feedback via conversational qualitative and quantitative research techniques leveraging immersive chat, video, photos and videos that a reveal both contextual decision dynamics and underlying emotions. The result produces insights that are equal to, if not more accurate than traditional survey responses provided by unengaged respondents. Reach3 Insights results represent a range of ages, genders and geographies and are projectable to the U.S. population