Sports and social justice in the era of COVID-19: How fans feel about sports in 2020

Prioritizing the health of players and staff is not only the right thing to do, it’s also what fans expect.

Most fans are feeling positive about the return of live sports and are supportive of how leagues are handling social justice issues, but are concerned for players’ safety. 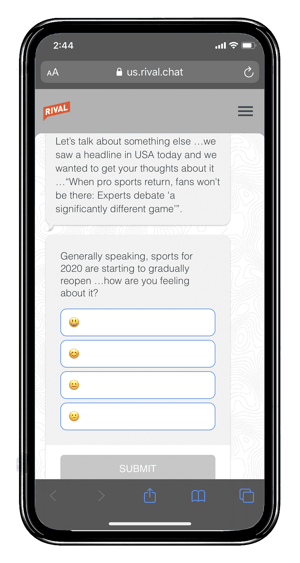 Those are the main takeaways from our ongoing longitudinal research on the impact of the COVID-19 crisis on consumer attitudes, behaviors and preferences. Conducted in late July, the study used our immersive and conversational techniques and leveraged mobile messaging-based market research platform from our sister company Rival Technologies to capture in-the-moment quantitative and qualitative feedback from a Mobile Community of American and Canadian consumers.

Launched just as the NBA and the MLB were restarting their seasons, this research reveals what’s important to fans as sports comes back. Here’s a look at our top takeaways.

A mix of excitement and apprehension

More than 50% of the fans we engaged expressed positive feelings about the return of live sports. Twenty-seven percent said they love the competition and the distraction sports brings to day-to-day life. Another 26% said they’re happy about sports coming back but have concerns for the health of the players and everyone else involved. Many fans, however, are worried about sports returning in the absence of a vaccine or a cure, while others are unhappy that they cannot attend in person.

More than 50% of the fans expressed positive feelings about the return of live sports.

The excitement for the return of sports is universal in all three leagues we looked at: the NBA, the MLB and the NHL. Nearly 50% plan to view the same amount of basketball and baseball as last year, while 67% plan to watch the same amount of football.

Interestingly, one quarter of fans in each respective sport said they would attend games in person this year if they could.

The ratings boost that both NBA and MLB enjoyed when they returned confirms just how starved people have become for sports. It would be interesting, however, to see how fan sentiment changes as the pandemic rages on. The MLB, for instance, already have had to deal with a few outbreaks. More news like this could once again shift fan attitudes and ultimately impact viewership.

Confidence with precautions but also worried about health and safety

Fans gave the NBA, NFL and MLB high marks for their plans for their return: 68% think the NBA is reopening properly, while 65% agreed with the same statement about the NFL and the MLB. But anxiety about safety remains high. In all three leagues, more than 7 in 10 fans said they are worried about the health of players participating.

68% think the NBA is reopening properly, while 65% agreed with the same statement about the NFL and the MLB.

As the season progresses for these leagues, it will be critical for them to consistently show that they’re doing everything they can to protect everyone involved without compromising the competition. The NBA is already doing this: the league recently tightened its protocol on retesting to avoid sidelining players with inconclusive results. With multiple teams dealing with outbreaks, the MLB, on the other hand, will need to move quickly to assure the public that the league is doing everything it can to protect players and staff.

When basketball and baseball came back, both leagues put Black Lives Matter on center stage. The NBA painted its court in support of the movement and allowed players to embroider the back of their jerseys with social justice messages. Similarly, MLB allowed players to add a patch with “United for Change” or “Black Lives Matter” on jersey sleeves. Most NBA and MLB players also took the knee during the National Anthem.

This level of explicit support for Black Lives Matter would have been unimaginable even just six months ago—a testament to the impact of the recent protests against police brutality and systemic racism. The good news is that most fans believe that the three leagues are doing a good job of handling social issues at this time. 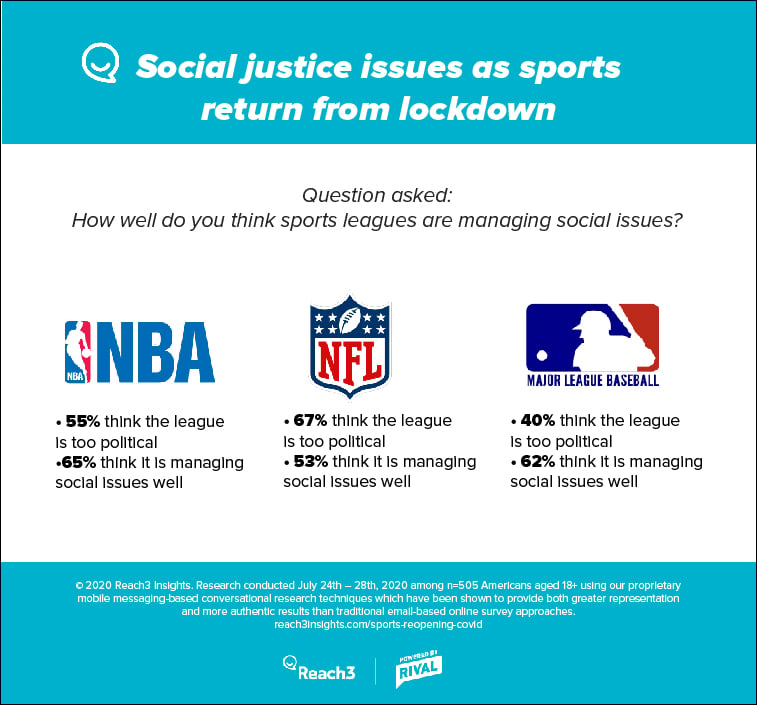 Among all three leagues, the NFL scored the lowest when it comes to how it’s managing social issues. This isn’t surprising given the league’s controversial history with Colin Kaepernick. But with commissioner Roger Goodell recently saying “Black Lives Matter” and admitting that the NFL made a mistake not listening to players earlier, it will be interesting to see how fan perceptions will evolve once football is back. Understandably, current and past NFL players as well as many fans may not completely buy that the NFL has had change of heart—the league will have to demonstrate through its actions that it is listening and taking meaningful action.

Our study shows that while people are eager to watch live sports again, this excitement comes with a big caveat: a safe and healthy environment needs to exist for everyone involved. Not a small ask, for sure, given how prevalent COVID-19 still is in the US. But prioritizing the health of players and staff is not only the right thing to do, it’s also what fans expect.

This pandemic has highlighted the importance of televised sports for fans. Other industries—restaurants, for example—also have a huge stake in the success of live sports. The fans are cheering for sports leagues to get it right—let’s hope they don’t miss the shot.

About the Reach3 methodology

Reach3 Insights conducts scientifically validated consumer research via modern mobile messaging networks instead of email to maximize both the representativeness and richness of insights. This method captures stream-of-consciousness attitudes, opinions and feedback via conversational qualitative and quantitative research techniques leveraging immersive chat, video, photos & videos that a reveal both decision dynamics and underlying emotions. The result produces insights that are equal to, if not more accurate than traditional survey responses provided by unengaged respondents. Reach3 Insights results represent a range of ages, genders and geographies and are projectable to the U.S. population.