Playlists, social and genre diversity: New research reveals why Spotify is leading the pack in the music streaming business 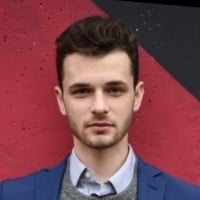 To say that 2020 has been a weird year for music is an understatement. Concerts and festivals are cancelled, and TikTok hits are dominating the pop charts. Also during this pandemic: a Godzilla-sized Travis Scott held a virtual concert on Fortnite, and somehow, celebrities singing “Imagine” didn’t cure the coronavirus.

But there’s one thing that has been consistent in the music industry: the growth of music streaming. Spotify reported a bounce back in Q2 with more new active users and relatively strong financials in the face of the pandemic. YouTube Music reported a loss in Q2 ad revenue but better-than-expected balance sheet and subscription growth as well, buoyed by an increase in video streams. Apple doesn’t break down its revenue by services, but given the company’s impressive Q2 2020 earnings, it’s a good bet Apple Music is doing just fine. 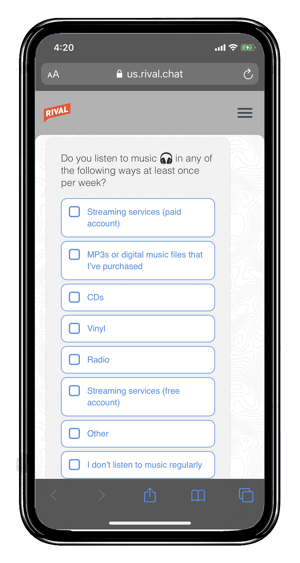 The resiliency of the music streaming business caught our attention at Reach3 Insights, so in July 2020, we decided to dig in further. Leveraging Rival Technologies’ market research platform, we engaged 299 people (from Innovate MR’s sample) to understand how the major players in the music streaming industry are doing and what lies ahead for them.

One of our major findings is that Spotify is still the leader, both from a market share and innovation perspective. Here’s a look at some of the ways Spotify is leading the pack.

Spotify has continued to reimagine what it means to listen to music in the 21st century and has out-innovated tech giants with deeper pockets like Apple and Google. In our study, Spotify was the most preferred platform, with 29% of music streamers picking it as their favorite.  Spotify has emerged as the go-to service for many by reorganizing offerings, adding new features, expanding content, and honing its recommendation algorithms to build a sophisticated, personalized ecosystem. Its bread and butter lie in enabling users to discover new music and interact with content beyond just streaming.

It’s a vibe. As more niche subgenres continue to pop up, (bedroom/dream pop, hyphy, etc.), Spotify has expanded its playlist offerings and developed more complex, genre-less curations. Music is being organized in ways that transcend a simplistic genre approach, in favor of grouping together songs and artists that match a particular mood, aesthetic, culture, or use case.

To help users discover new music, Spotify’s algorithms create “Made For You” playlists for each user. While listening to music that you’ve liked or playlists you’ve created are core features of any music streaming application, tailor-made personalized playlists represent growth opportunities. Spotify dominates the competition in this space, where 47% of its users say they like listening to their personalized playlists, while only 27% of Apple Music users and 23% of Amazon Music users say the same.

It never steers me to a song I don’t like.

Spotify’s sophisticated algorithms have allowed its AI to get so good at human-centric personalization that over half (51%) of Spotify users say it’s one of the main ways they discover new music, more than any competitor’s “for you” playlist (41% for Apple Music, 33% for Amazon Prime Music and YouTube Music). Users wholeheartedly trust Spotify’s playlist algorithms to recommend new songs they’ll like.

“Spotify is most relevant to my listening needs,” said one Spotify user. “The service seems to understand what I like, and it curates music, both new and older music, that I want to hear and is always evolving as well in terms of making the service relevant to everyone.”

Another user added, “Its algorithms are incredibly well tuned to my likes and dislikes. It never steers me to a song I don’t like. I am able to create my own playlists as well as be shown new songs with playlist suggestions that Spotify offers.”

“I actually would consider switching from Apple music to Spotify because of the Discover weekly features.”

Spotify’s “Discover Weekly” playlist is a prime example of how Spotify has perfected the personal playlist into a competitive advantage. This AI-tailored playlist consists of 30 songs (mostly new to the user) that are updated weekly. It’s so good, that some of have even considered switching to Spotify for this feature alone.

Spotify users value the social strategy of the platform. Not only do music streamers tend to follow their favorite artists on social media (which 83% of users do), but Spotify has made it easy to follow friends, see what they’re listening to, share songs, and even collaborate on playlists.

Spotify helps users connect with friends more easily. “I chose Spotify over all the other ones because…a lot of my friends have it so it’s easier to share playlists,” said one Spotify user. Even Apple Music users are considering deflecting, as one mentioned,  “A lot of my friends share and have collaborative playlists that I can’t be a part of because I’m not on Spotify, so I’ve actually thought about switching over.”

To younger generations especially, connectivity is king. Fifty-six percent of 18-34 year-olds report finding new music through social media. By helping individuals connect with their friends through collaborative playlists, live updates on what friends are listening to, and the ability to easily share playlists and songs, Spotify helps individuals connect over music.

While Spotify got high marks from music streamers in our study, there are some requested features that might benefit other players as well.

With Google Play shutting down and consolidating behind YouTube Music, Google has potential to more seamlessly integrate YouTube Music with Google’s ubiquitous search features. In fact, 56% of music streamers already discover music on YouTube (in general, not YouTube Music).

YouTube may also already occupy a space where other music streaming apps fall short. As COVID-19 has increased the demand for virtual concerts and livestreamed music, visual media for consuming music may be on the rise. Nearly half of streamers are interested in full music videos—the second most requested feature for any music streaming service, and one that YouTube Music already has. 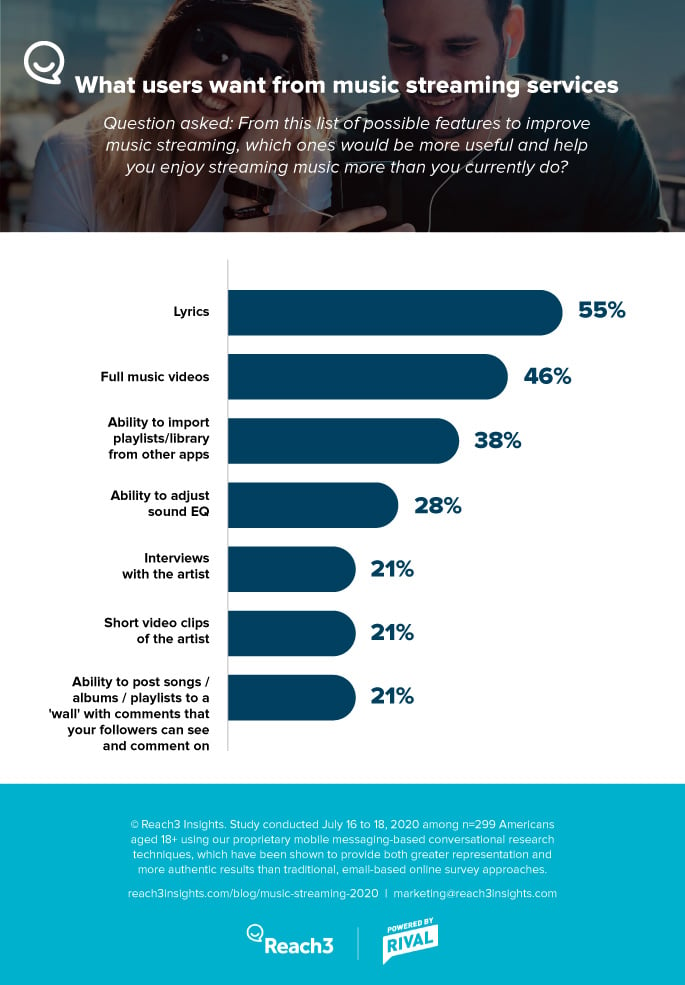 The most requested feature from music streaming services is actually something YouTube already  provides: lyrics. Some of YouTube’s videos already contain lyrics and quick closed captioning, so Google may be well-positioned to further develop these into competitive advantages, if it can properly and legally source lyrics without violating copyrights or unfairly scraping Genius’s lyrics.  However, YouTube Music struggles to be music streamers’ first choice (17%), and only 29% of YouTube Music streamers pay for premium. The app still has work to do in addressing some of its core users’ concerns as well.

How long will Spotify’s dominance last?

The war in the music streaming business is really just beginning, with different companies pursuing different strategies. Apple is reportedly in the process of launching a subscription bundle—potentially making it more attractive for people to switch to Apple Music. Spotify, on the other hand, is doubling down on podcasts, doling out big bucks to lock in Joe Rogan and Former First Lady Michelle Obama.

As the competition heats up, it will be critical for music streaming companies to engage both current users and non-customers to look for new opportunities for innovation. For the most part, the costs and barriers to switching from one music streaming platform to another remain relatively low. The companies that can create unique differentiators and build a brand that people have an emotional connection to are most likely to win in the long-term.