Intersectionality on the Internet: The Impact of LGBTQ+ Youth on Social Media 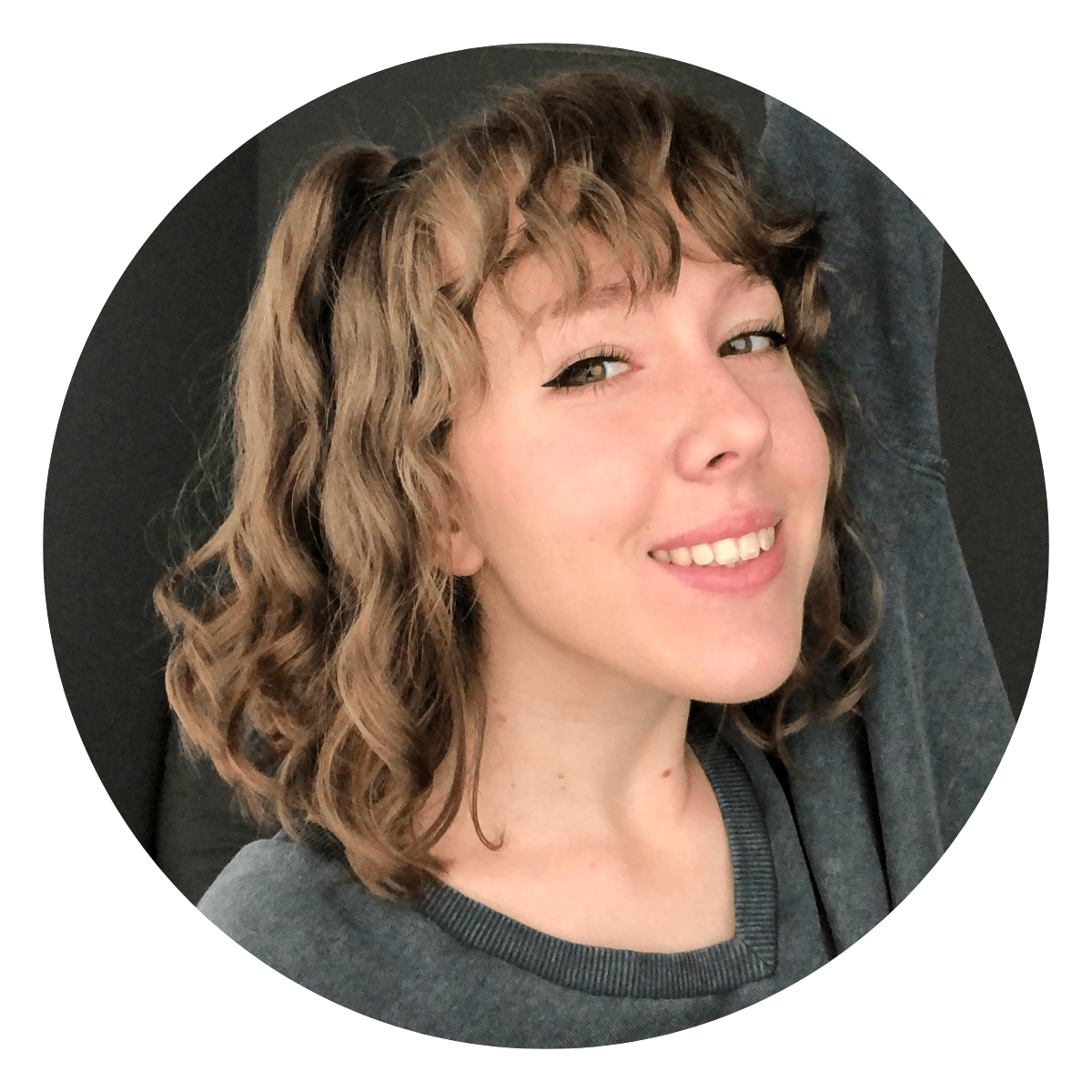 Social media continues to be an incredibly important tool for Gen Z to explore personal identity and to learn more about other people’s identities.

As social media evolves, Gen Z encounters more diversity in people and opinions at a young age than any previous generation. These ever-expanding platforms present an earlier chance for education, self-expression, and discovery, but they also bring opportunity for discrimination on all bases of identity. Since social media encourages users to capture and post content from different snapshots of their life, it creates a public showcase of intersectionality.

As researchers, we spend time thinking about how to reach

certain demographics and hit nested quotas to make sure we get diverse opinions in our research. Nested quotas are exactly what intersectionality is – a crossroads of all parts of an individual’s identity. Although identity can be a sensitive topic, our conversational approach and Rival Technologies’ mobile messaging-based market research platform encourages 466 participants our age to share meaningful experiences through video and text about the impact of identity on the internet.

In research, we know that there is often some degree of difficulty when fielding for nested quotas since incidence drops so quickly when multiplying factors and searching within specific demographics. The real-world implications are the same – the smaller the groups within segments of someone’s identity are, the harder it is to find overlap and peers with similar experiences.

Throughout our chats with LGBTQ+ youth, many feel safer using apps that make an effort to promote creating connections within smaller communities. Social media like Discord and Reddit center around users posting for specific communities they choose to be active in, providing opportunities for LGBTQ+ youth to teach others about their identity and to finally find others who share identities similar to theirs. Several users write about specifically looking for these types of interactions on social media:

“Growing up in a poor, rather conservative family it can be hard to express yourself. That can be harder when racism, homophobia, and transphobia are common in the state you live in. Having social media allows you to interact with people that share common characteristics such as race or ethnicity, sexuality, and gender identity.” - 16-17, biracial, genderfluid, questioning

“I don’t interact with people very differently because of my identity but there are definitely some little things, like how I support things that I find important. I often will put out a post on Instagram on awareness days or Pride about the topic. Sometimes I try to help others who aren’t sure about their identities and assure them that there's no rush or advise them of resources. Social media is very helpful with finding groups of people who are like you and understand you.” - 21-24, white, trans male, gay/questioning

Social media opens up the world and allows anyone to find their "chosen family" or support systems from any corner of the globe in an online digital space. 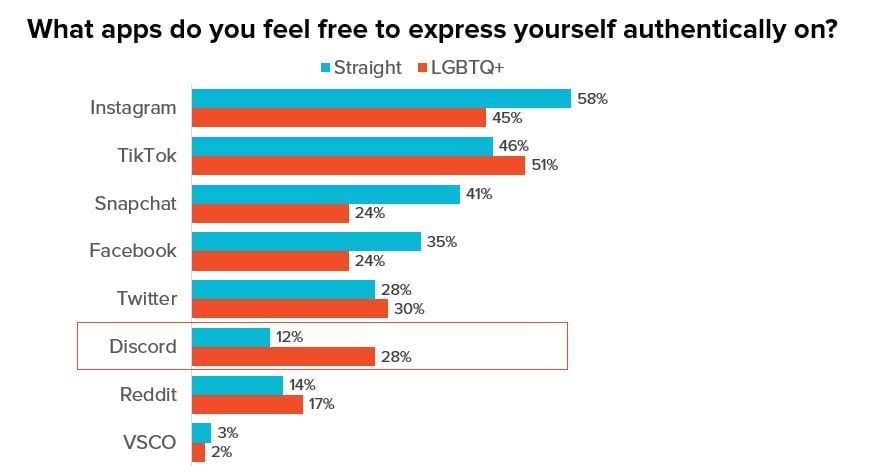 And the trend is similar when looking at gender identity as well, with non-cis participants also more likely than their cis counterparts to say they feel authentic on Discord.

While only 16% of the cisgender people we spoke with mention Discord as a platform for expressing themselves, 63% of trans-masculine people feel comfortable on Discord; tying with TikTok for first place within this group. Two people from this group share why Discord is among their top choices:

“I'm definitely afraid to speak my mind and such about my identity in certain parts of the internet. I don't talk much, besides Discord groups with like-minded friends, and on other social media avoid posting myself, except for my art. But my identity does come out IN my art that I post online.”- 21-24, white, trans male, gay & asexual/aromantic

While posting on social media where anybody can see or judge can feel daunting, Discord focuses on socialization within smaller, more private communities that are easier for minority groups to feel safe in.

Just as how researchers may think of nested quotas as multipliers like Ethnicity X Gender, intersectionality is similarly more than the sum of its parts. Minorities may face discrimination not just from their ethnicity or gender but also their ethnicity x gender (e.g., prejudice faced as a Black person, as a female, AND a Black female). Multiply these by sexual orientation and more marginal  gender identification, and the types of discrimination become compounded and interlinked. One participant explains: These negative connotations can be debilitating, especially when they apply to multiple aspects of someone’s identity. Without anyone to talk with about this prejudice, it becomes even more difficult. This is where social media comes in: since the internet makes it so easy for people around the world to interact, it becomes a very important resource for Gen Z to find others with similarities that people around them IRL (in real life) may not share.

Over half of the Gen Zers we spoke to told us that they actively use social media to learn more about their gender identity. 67% of cis participants agree that they feel entirely or nearly perfectly represented by social media, but that number drops to 55% for non-cis participants, and as low as 43% for those describing themselves as trans. One participant shares:

“I am afraid to tell who I really am on my YouTube channel, so once I transitioned, I stopped making videos. I used to have a successful channel about Roblox games and made about $300 a month. Now I’m only out in groups of friends I trust, like on Discord.” - 16-17, white, trans female, bisexual

Since trans and gender nonconforming individuals do not feel as comfortable being open online after they transition, it leads to underrepresentation of those groups on social media. Gen Z may be "out" on We asked participants to consider all aspects of their identity and how they come together to impact online presence:

“My gender identity and sexuality allow me to be accepted in some online communities but entirely shunned in others. I'm black trans-masculine and racism usually overlaps with other prejudice in online spaces. All of my accounts are faceless, and I tend to remain impartial online because showing my face would make a whole lot of people mad, be they part of the black community or otherwise.” - 16-17, Black, trans male, bisexual

Intersectionality in identity affects content creation and consumption on social media because users face a higher potential for prejudice from online audiences. On apps like TikTok or YouTube, content can be seen from anywhere in the world so people with diverse intersectional identities often sacrifice certain parts of their identity in order to ‘fit in’, or they have to work a lot harder to find communities where they can feel fully accepted. When multiple parts of someone’s identity can draw negative attention online, the combination of these different facets can make social media feel like an unsafe place.

People Questioning their Identity are Wary about Self-Expression Online

“I do not let people know I’m probably trans, even online, because I am scared for my safety, despite trying to actively and vocally express support for the trans community.” - 21-24, white, questioning, gay

“I feel like sometimes it’s hard to fully be myself for fear of judgement.” - 21-24, white, questioning, straight

“People tend to judge based on color, race, gender, etc. so I feel like that has an effect in the way I present myself to others.” - 18-20, Hispanic, non-cis, straight

Even though social media sites often focus on creating communities and opportunities to meet new people, discrimination still hinders those who are questioning their gender from speaking about their experiences online. This leads to fewer places where non-cis individuals feel safe: while 11% of cis participants feel unsafe on social media, that number jumps up to 28% of trans participants who say they do not feel safe on any of the social media apps they use.

Moving forward, it is important that social media apps continue to create spaces where people from all different backgrounds can come together and feel safe interacting with new communities. Social media continues to be an incredibly important tool for Gen Z to explore personal identity and to learn more about other people’s identities. Social media platforms must continue evolving and creating spaces for diverse voices to ensure that our futures are more inclusive and understanding, providing opportunity that doesn’t discriminate on any basis of identity.