There is no doubt that the treatment of women in the gaming community can be improved upon, and 54% of women believe it's already getting better. Yet, 42% believe it's staying the same.

Despite what people think, backlash and harassment towards women and girls who game are still common in 2022. Whether it's unsolicited comments from family members and friends or offensive remarks from strangers online, these instances are affecting the gaming experience for women.

The Problem of Harassment Persists

As much as 88% of online harassment that female gamers have encountered was gender-based. As a result, 47% of those women who were harassed playing a game either played it less or stopped completely. It’s common for women to receive comments like, “Girls aren’t good at gaming,” only to be ganged up on by male players and defeated. If women are so inferior at games, why do men feel the need to team up to eliminate them?

"[In a] first person shooter game, men made comments about how I am not good at it because I’m a girl. Once playing with a boyfriend, the other guys online were saying to “pass her over here when you’re done with her” and laughing about it." – She/her, Age 25-34

"I was playing an MMO and was getting harassed from people I was doing raids/dungeons with because I was a girl. This eventually made me stop playing for a year and I ended up changing servers." – She/her, Age 35-44

"I stopped playing Overwatch because the harassment was overwhelming. Sometimes it was insulting or patronizing but mostly it was sexual messages and creeps finding my socials after the game" – She/her, Age 25-34

"It was the online Call of Duty game, can’t remember which game, but I had guys either trying to hit on me, send multiple messages to harass me or they would gang up and kill “the only girl” in the game because I was inferior" – She/her, Age 18-24

The most common gender-specific challenges that women have faced include: having their performance patronized due to their gender (e.g., comments like “You’re pretty good for a girl”), unwanted sexual messages through in-game chat or post-game DMs, and unwanted messages asking for dates or a relationship. 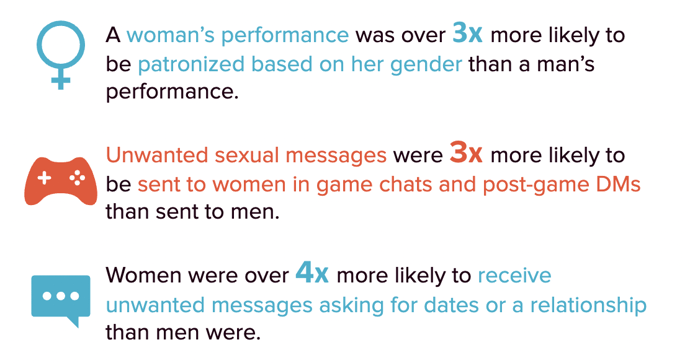 34% of women reported that they have received comments about gaming not being a productive hobby, while 24% have been told they are too old to play video games. Most of these women are being told to do more ‘productive’ things with their time, like networking or focusing on their careers.

And even though there are plenty of video games that are clearly rated M meaning age 18+, they also get snide remarks about leaving gaming to the kids.

Additionally, 15% of women reported receiving backlash about their gender, being told they should instead focus on domestic issues such as housekeeping and childcare.

"I definitely get unsolicited comments from other players, especially when using Discord. Also, vaguely disparaging remarks from my mother-in-law because I wasn't engaging in more domestic activities." – She/her, Age 35-44

"[I get told that] video games are a waste of time. You should be working or cleaning/taking care of the house." – She/her, Age 25-35

"Some people tell me to grow up and act like a “woman” that I should be learning how to cook and clean and not waste my time with manly things" – She/her, Age 18-24

"I'm a gamer and also a mother, so there is backlash from that just on the title alone. Gamers will assume that means I'm gaming all the time and not taking care of my kids, and that's very false. I game when I can. My kids come first, but I do love playing in my free time." – She/her, Age 25-35

When we ran this study last year, one of the key findings was that most women used either a gender-neutral or male identity to hide their gender. Despite a drop from 59% in 2021 to 53% this year, over half of women continue to hide their identities.

Women do not feel comfortable openly gaming online because of the harassment they might face, and sadly some women feel the need to adopt these non-female identities to game in peace. 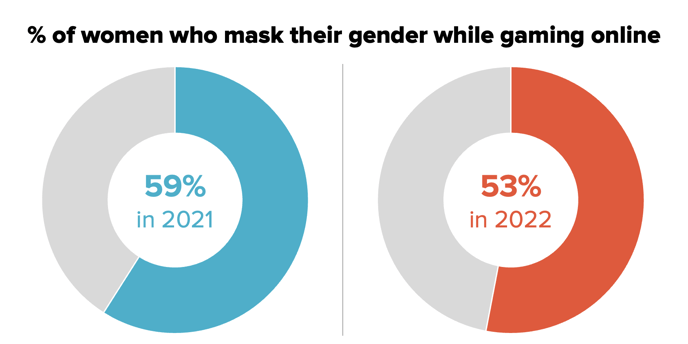 Aside from masking, women also used other tools and tricks to keep themselves safe online. Blocking another player was the most chosen answer for both men and women, at 66% and 67% respectively. Where is there a difference? 63% of women played anonymously while only 32% of men did the same. When women do play online, they prefer to play with people they know like friends and mutuals, not strangers

Where Can Women Feel Represented and Safe?

Women who felt that there are little to no good female communities online expressed concern about over-sexualization of female characters, the lack of representative body types, and the lack of respect for female gamers as a whole. It’s not exactly empowering for women who play video games to see female characters portrayed as overtly provocative, sexually objectified, or damsels in distress who need to be rescued.

This, combined with the disrespect they face while gaming online, creates an environment where women don’t feel welcome or included.

“I was playing a video game and a group of males were mocking me because I was using a female avatar, I was doing great in-game, but the constant harassment led to my game skill going down.” – He/him, Age 25-34

“I know I've played a few MMORPG games and the better the male armor, the bigger and bulkier it usually is. Whereas female armor gets more bikini-like the better it is, and I'm fine with the game offering that style to female characters who want it but there should be armors which cover more skin if women want that.” – She/her, Age 35-44

“I’ve been picked on and mostly guys just seem to be more interested in making sexual or inappropriate comments that are backhanded…maybe they think they’re flirting or being funny…but it can be very off putting.” – She/her, Age 35-44

As far as games are concerned, Fortnite received the most mentions since there are a variety of strong female characters in the game to choose from, who match the strength of their male counterparts.

“Fortnite, because so many streamers and gamers of all genders play and do not get any judgment. Epic has a no tolerance policy for that, and the people will be banned.” – He/him, Age 18-24

“Fortnite. I think they have a lot of really cool girl skins, so you as a girl can play the game and feel happy there are girl characters you can customize and create.” – She/her, Age 35-44

The most inclusive genre was action-adventure, closely followed by battle royale and RPGs. Shooters and simulation-based games were also quite popular. Action-adventure and RPGs were acknowledged for their inclusive storylines, while shooters and simulation-based games were liked for their representation of female characters. At 32%, first-person shooters (non-battle royale), like Call of Duty, was the genre where women faced the most harassment.

“Generally, single player games like adventure games are better at representing females because they incorporate them into the storyline.” – He/him, Age 25-34

“Action/adventure seem to do a pretty good job [of representing women]. The change has come over time to parallel our slow, societal evolution of concepts of women.”– She/her, Age 35-44

“I think life/farming simulators and even some fighting games have good female representation. They have larger female communities, and more women work in these genres.” – She/her, Age 25-34

“Simulators, farming, and slice-of-life games tend to have the best female communities. This includes games such as Animal Crossing, Stardew Valley, and Petz. I think these games are better because they aren't as intimidating to a female audience since the female characters are more relatable and not overly sexualized like they are in most action games.” – She/her, Age 25-34

So, What Can Companies Do?

There is no doubt that the treatment of women in the gaming community can be improved upon, and 54% of women believe it is already getting better. Yet, 42% believe it is staying the same, which means more work needs to be done since there is still an issue with women’s treatment and representation in gaming. Companies should consider making their games more inclusive and safer for women, to prevent current and future generations of female gamers from experiencing mistreatment.

A significant number of women are either playing anonymously, using a gender-neutral or male identity, or even playing alone. Giving women the option to game in an exclusively female space can allow them to play without masking their gender.

Women would like companies to adjust female character designs by making them less sexual. They are concerned with the lack of representative body types.

The gaming industry (and other industries that want to reach and authentically engage with today's gaming community) should provide more support to female gamers who have experienced harassment. There are many things that could be done about this: no-tolerance policies can get implemented, female character designs can get adjusted, companies can investigate the reasons behind reports made by female gamers.

If brands are willing to take these concerns seriously and implement changes to improve the gaming experience for women, companies will benefit too. It’s a win-win situation for everyone.

We're only able to capture these insights because of our immersive, mobile messaging-based research approaches that engage people in a fashion that seems natural & organic to the topic. For more insights from our 2022 Women in Gaming Study, get the full report here.