If you want to resonate with Gen Z consumers, it’s important to consider how you might foster a sense of community in the same way that Fortnite has.

The idea of tapping into consumers’ emotions to drive customer loyalty is not new, but putting it into practice isn’t so easy. It requires creativity but also a deep understanding of your audience. Without insight on your customers’ wants, motivations, and aspirations, it’s impossible to create products and marketing campaigns that will emotionally resonate with your target audience.

Engaging with Gen Z consumers, of course, is no exception. To connect with younger people, it’s not enough to use their language or be where they are. And the reality is that most companies aren’t quite sure yet how to market to these mobile-first digital natives.

Recently one brand captured the attention and imagination of Gen Z consumers in a way we haven’t seen before—and its success provides important lessons for all marketers. I’m talking about the game Fortnite. In case you’ve managed to escape this phenomenon, Fortnite is an online multiplayer game that allows up to 100 players to battle it out in an ever-shrinking area. Players scavenge weapons and resources and fight it out to be the last person, duo, or squad standing.

Fortnite has resonated with all generations, but it’s particularly popular with Gen Z players. (Generation Z is the cohort that comes after millennials, born after 1997.) Millions of tweens, teens and adults play the game, spawning countless memes and online chatter.

The game’s phenomenal rise also caught our attention at Reach3 Insights, and we wanted to learn exactly what makes the game successful and what lessons other industries can learn from it. In our study, we engaged hundreds of Fortnite players (most of whom were Gen Z) and asked them about their experience.

One interesting challenge we faced for this study was the fact that it’s hard to reach Gen Z people on emails. Young consumers typically don’t open their email inbox—they have an email only because it’s required to sign up for accounts or apps.

To reach the right people in the right channels, we decided to leverage software from Rival Technologies, our sister company specializing in conversational surveys. With Rival, rather than deploying surveys via email, you send out chats through social media and messaging apps—channels that Gen Z consumers are more likely to hang out in.

We took on a two-phase approach. In the first stage, we engaged 50 kids, aged 9 to 18. Players received a series of six chat surveys leading to the launch of Fortnite’s season six. We asked them about gameplay, their friends, hobbies, brand perceptions, and their expectations and experience afterward. A majority (95%) agreed to do a multi-day diary, sharing their daily gameplay, wins and in-game purchase activity.

For the second phase, we expanded significantly, engaging 860 Fortnite fans in the process. We partnered with TheSquatingDog, a popular Twitch broadcaster and Fortnite player, who shared a link to our first chat on Instagram. This phase involved four chats.

Insights from these chats provide a rich picture of the typical Fortnite player and uncover crucial insights on how this game is changing different aspects of Gen Zers’ lives. Overall, we collected over 900 completes, saw a 62% response rate and received hundreds of videos and photos.

Along the way, we also learned some best practices on how to better connect with Gen Z. Here are some notable takeaways.

One of our most surprising findings is how Fortnite strengthens—rather than damages—social relationships. While 19% of the players we engaged said they hang out less frequently with their friends as a result of Fortnite, 66% said they are better friends in real life as a result of the game.

Those two stats may seem contradictory, but it makes sense if you look at how Fortnite builds community and word of mouth. Change is the only constant in this game: every week or two, players can expect small changes to happen and there is usually a moderate change or event every month. (One example of the latter: the brand new Halloween-themed Fortnitemares event.) These changes give players something to talk about, both in the game and in person.

Not only does Fortnite provide an immediate common ground—it’s also a way for Gen Z players to talk to their friends any time they want. The game’s voice chat enables players to talk (loudly and animatedly) and joke around while playing online with their friends, just as if they were hanging out in real life. This has become the normal way to hang out for many in Gen Z.

Online gamers often have a reputation for being anti-social, but that stigma might need to go soon. We found that at the core of Fortnite’s success is an ability to foster real-life relationships among younger gamers and a wider sense of community among all players of the game.

If you want to resonate with Gen Z consumers, it’s important to consider how you might foster a sense of community in the same way that Fortnite has. How can you get your customers and advocates interacting with each other about your product? Providing opportunities for young people to connect with their own tribe—both online and in person—is critical.

Create Both Positive and Negative Emotions

Fortnite draws players in with its colorful aesthetic and exciting game design. And as I already mentioned, the game always has something new going on. As a result, emotions run high in the game—but even with the playful visual design, not all of those emotions are positive. In our tone analysis of 122 selfie videos, we found that Fortnite gives players both euphoria and stress. This combination generates tension and a sense of excitement and joy, which also contributes to the “just one more round” addictiveness, which I’ll cover more about in a moment.

Sentiment analysis reveals that while a majority have a strong positive sentiment towards Fortnite, some players also feel anger. But that anger isn’t directed towards the game itself—it’s directed more at other players or themselves due to not winning and rarely directed to Fortnite itself. 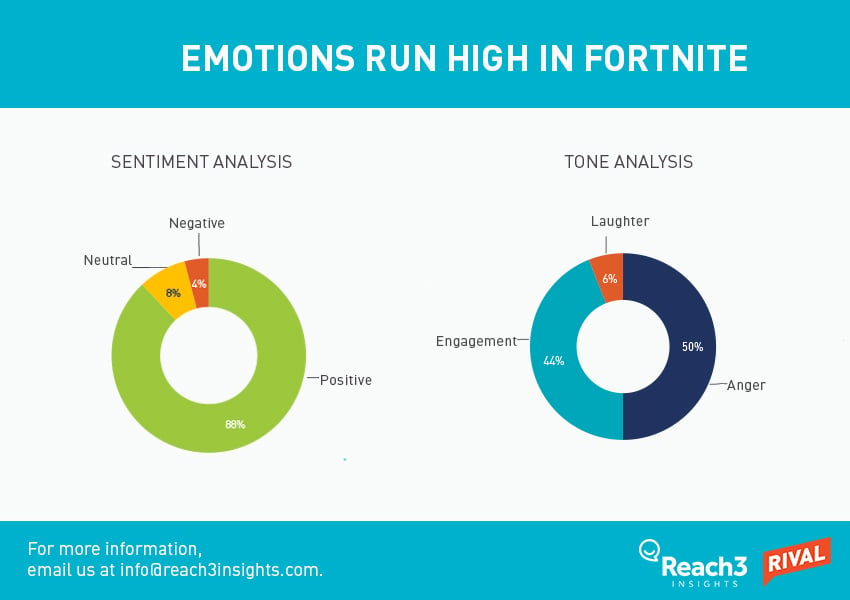 The lesson here is that it’s not enough to create positive feelings. Negative emotions can just be as compelling, as Fortnite demonstrates, but you have to use those feelings in a way that builds excitement and discussion rather than frustration in your product or the experience.

The selfie videos we collected were also useful in learning why Fortnite is so addictive. We found out that the first aspect has to do with winning. Because you have to outlast 99 people, winning is somewhat rare and a big deal. “When you win, it feels so good,” one young tween said in a selfie video. “Out of a hundred people, you’re the one that won the game! It is so fun.”

There’s something about losing as well though. When you lose a game, you are usually only two to three shots away from winning. That’s very close, so it makes you think “what if?” and want to try again—maybe this time you’ll find better items or decide to land in a more fortuitous area of the map. And because the turnaround time between games is fast, you can be back up in a new game in only a few minutes to try again (and again, and again…).

Creating this “lose small, win big” environment is perhaps easier in gaming than other industries, but there’s a bigger lesson here about providing young consumers with a sense of accomplishment. Consider if there’s a way to add gamification to either your product or a marketing campaign, but don’t force it. Make sure it’s a natural fit and that it’s fun and rewarding. By tapping into Gen Z’s competitiveness, Fortnite has created a product and experience that people want to revisit again and again.

In many ways, Gen Z consumers are similar to the cohorts before them: they want a sense of community and are motivated by both negative and positive emotions.They are also competitive. What is a bit different is their expectations on how these needs are met. The technologies available to them are shaping how they form and maintain their relationships, and what they do with their time. As technologies and expectations change, it’s imperative that companies continue to engage young consumers in conversations to understand and meet their evolving motivations.

A version of this article first appeared on the GreenBook blog.

“Who needs another research supplier?”

“We’re managing fine as it is, thank you very much!”

As the new leader of Reach3’s Financial Services practice, I was...

The term “unprecedented uncertainty" has been used with such reckless abandon that it has all but lost its impact.  As fate would have it, the events surrounding...